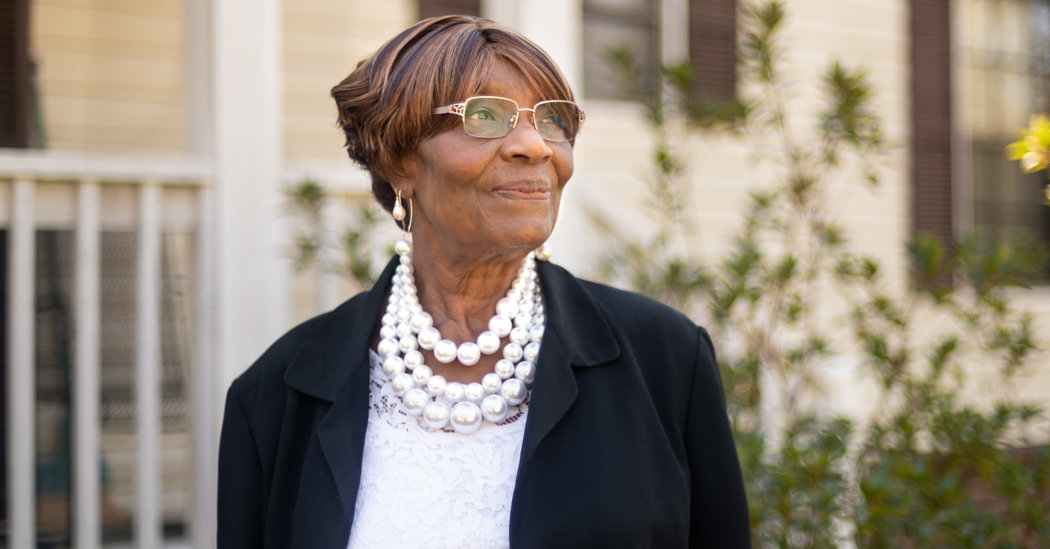 HOPKINS, S.C. — Whether a simple question from an elderly church parishioner persuaded Representative James Clyburn to make his seismic endorsement of Joe Biden before the South Carolina primary will probably be known only by Mr. Clyburn himself.

But if the endorsement and the ballots of black voters in South Carolina and across the South transformed the presidential race, it would be hard to find a more appropriate co-star in the drama than Jannie Jones, a 76-year-old church usher whose great-grandmother came to South Carolina aboard a slave ship.

A week after the South Carolina vote, she was still elated by her Feb. 21 encounter with Mr. Clyburn, whom she had never met before, and was astonished to have played a role in what might have been the most important moment in the Democratic race.

“I’m still sitting here and having a hard time believing it,” Ms. Jones recalled in the living room of her tidy home a couple of miles from the church. She added, “Joe was nearly dead, and now he’s come back to life.”

On Feb. 21, Ms. Jones attended the funeral of James White, Mr. Clyburn’s accountant. After serving as an usher at the service at St. John Baptist Church in Hopkins, S.C., Ms. Jones noticed Mr. Clyburn standing against a nearby wall. On the spur of the moment, she said, she waved him over, with a crook of her finger, to the pew where she was sitting.

He leaned over, and she whispered, “I need to know who you’re going to vote for.” He replied: “Joe Biden. Are we together?”

“When it’s politics, you don’t know who for who,’’ she recalled. But she said she gave him a thumbs up and then asked: “What are you going to do for him, for the people?”

At his Feb. 26 endorsement Mr. Clyburn said, “I decided then and there that I would not stay silent.”

Whether the congressman seriously weighed not giving an endorsement, the nod from Mr. Clyburn helped propel Mr. Biden, the former vice president, to a resounding win in South Carolina on Feb. 29, and to a sweep of 10 out of 14 states three days later on Super Tuesday.

Ms. Jones said that she recognized Mr. Clyburn from seeing him on television. “But he didn’t know me from Adam’s house cat,” she said. “When I got home, I didn’t think no more of it. I just thought that hearing from him meant the world for me. I didn’t know that it was a big influence for him.”

Ms. Jones was raised on a farm a mile and a half from her current home by her grandparents. They lived in a small farmhouse without a telephone or a television set. She showed off a framed photo of her great-grandmother Ellen Ruth Davis, who, she said, came to America on a slave ship.

She still keeps Ms. Davis’s pistol in the house. Another photo shows her grandmother Mary Jane Davis Howell Simpson, her head wrapped in a white scarf. “You’d see her with that white apron on and her head wrapped all the time, except when we went to church,” she said. “She probably got some of that slavery stuff from her mother.”

Ms. Jones recalled a strict but loving childhood: church clothes were ironed by a hot cast iron pan, firewood was cut by hand and the family’s produce — okra, peas, collard and turnip greens, and sweet potatoes — were plowed by a mule. Endless acres of cotton were picked by hand in the baking Carolina sun.

Ms. Jones was married to James Jones, one month before President John F. Kennedy was assassinated in 1963, and the two have been married ever since. Mr. Jones drove long haul trucks for 41 years. The couple had five children, four of whom have served in the U.S. Air Force.

Ms. Jones said that although she was never particularly politically active herself, she became interested in politics during the Civil Rights era, when organizers in the movement would speak at her church.

Mr. Clyburn said in an interview on Saturday that he could remember being similarly beckoned only once before. He was taking a boat at the time to a small African-American community on Daufuskie Island with the legendary black South Carolina educator Septima Clark. As the boat was tossed by waves, Mr. Clyburn shouted at his daughter Mignon to sit down as she ran around the deck.

“Then I looked up into the eyes of Septima Clark,” he recalled. “She beckoned me over in the same way this lady did, and patted the seat next to her. Then she leaned over and said, ‘Isn’t it strange how much we sometimes react when we see so much of ourselves in our children?’”

Ms. Jones’s words, he said, “were just ringing in my ears” until the morning of the endorsement.

“In the foreword of my memoir ‘Blessed Experiences,’ I said that all my experiences have not been pleasant, but I’ve considered all of them to be a blessing,” he continued. “That experience at St. John — that was a blessing.”