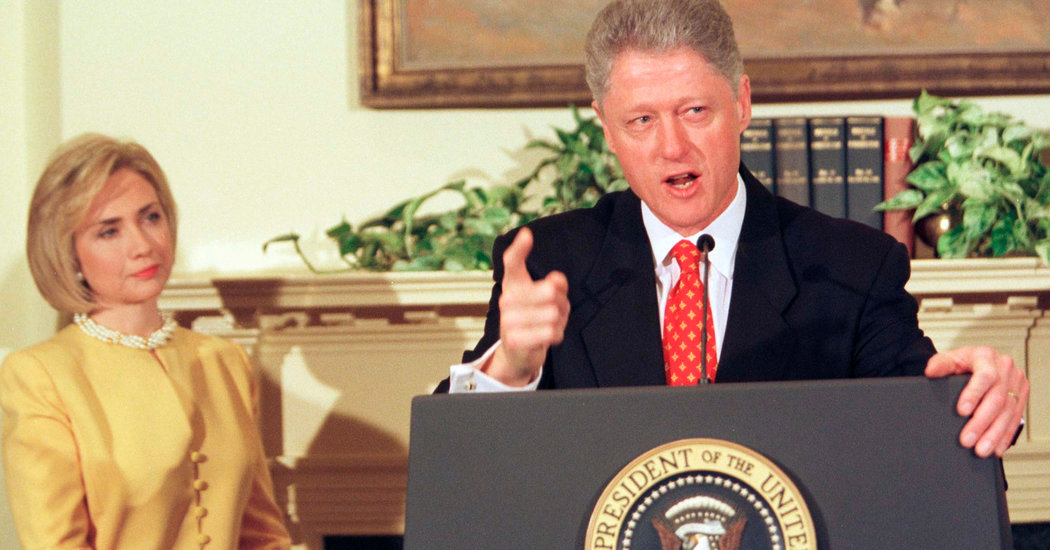 Former President Bill Clinton, recalling the sex scandal that led to his impeachment in 1998, says in a new documentary series that his extramarital affair with Monica S. Lewinsky was a way of “managing my anxieties.”

The four-part documentary series, “Hillary,” which was released on Friday on Hulu, focuses on Hillary Clinton’s life, her marriage to Mr. Clinton and her unsuccessful campaign for president in 2016.

In the series, Mr. Clinton, 73, is asked by the director, Nanette Burstein, why he engaged in an affair with Ms. Lewinsky, then a White House intern, and whether he weighed the risks.

“Nobody sits down and thinks, ‘I think I’ll take a really irresponsible risk,’” Mr. Clinton says. “It’s bad for my family, bad for my country, bad for the people who work with me.”

Mr. Clinton says that he was under enormous pressure, but that his actions were inexcusable.

“You feel like you’re staggering around — you’ve been in a 15-round prizefight that was extended to 30 rounds, and here’s something that’ll take your mind off it for a while,” Mr. Clinton says. “Everybody’s life has pressures and disappointments and terrors, fears of whatever, things I did to manage my anxieties for years.”

Mr. Clinton’s explanation drew derisive reactions on Twitter, with some commenters suggesting that the president should have turned to Xanax, Valium or meditation.

The House impeached Mr. Clinton on charges that he lied to a grand jury about his affair with Ms. Lewinsky and obstructed justice, making him only the second president to hold that distinction until Donald J. Trump. Like the current president, Mr. Clinton was acquitted by the Senate.

Mr. Clinton at first denied having sexual relations with Ms. Lewinsky during a videotaped deposition in a sexual harassment lawsuit brought against him by Paula Corbin Jones, a former Arkansas state employee who claimed that Mr. Clinton had exposed himself to her and propositioned her in a hotel room in 1991, when he was governor.

In the documentary, which features behind-the-scenes footage from Mrs. Clinton’s campaign against Mr. Trump and was screened at the Sundance Film Festival in January, Mrs. Clinton says Mr. Clinton sat on the side of the bed one morning and said a newspaper was set to publish allegations that he had sexual relations with an intern.

“I was, like, having a hard time processing it,” Mrs. Clinton says. “He said, ‘Well, there’s nothing to it. It’s not true.’ He was adamant and he was convincing to me.”

Ms. Lewinsky was an intern for Jennifer Palmieri, a special assistant to the White House chief of staff and later the communications director for Mrs. Clinton’s 2016 presidential campaign. Ms. Palmieri says in the documentary that Evelyn Lieberman, the deputy chief of staff at the time, expressed concerns about Ms. Lewinsky’s presence in Mr. Clinton’s orbit.

“I didn’t think anything of it because, of course, who would think that Bill Clinton could be that stupid?” Ms. Palmieri says.

Mrs. Clinton publicly stood by her husband when the allegations first emerged, including during an interview with Matt Lauer on the “Today” show. Mr. Clinton eventually confessed to the affair.

“I was just devastated,” Mrs. Clinton says in the documentary. “I could not believe it.”

Mr. Clinton says the most difficult part of the ordeal was facing the couple’s daughter, Chelsea.

Mr. Clinton says he is a different person now.

“You know, we all bring our baggage to life and sometimes we do things we shouldn’t do,” he says. “It was awful what I did.”