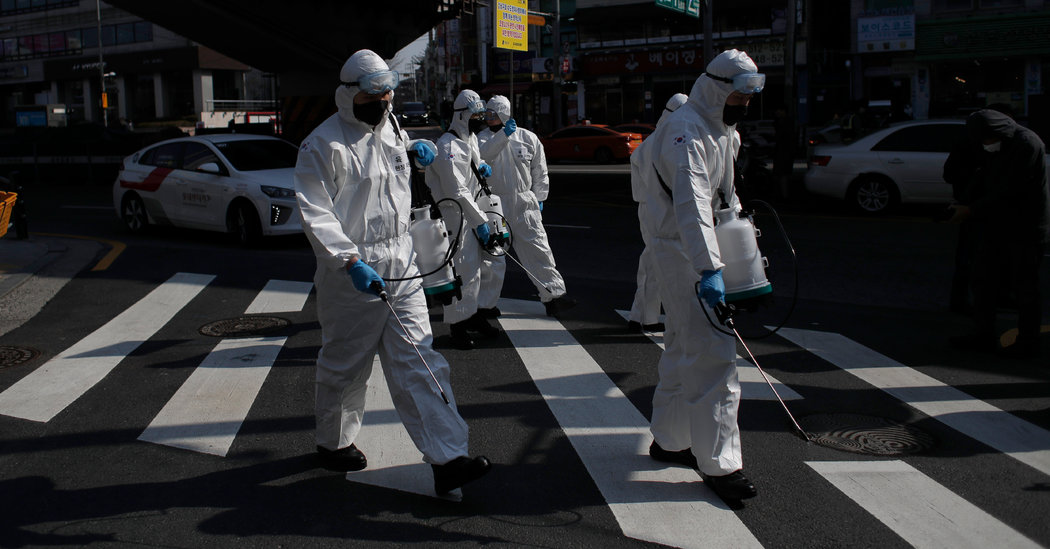 (Want to get this briefing by email? Here’s the sign-up.)

We’re covering the latest in the coronavirus outbreak, Elizabeth Warren’s withdrawal from the presidential race, and a federal judge’s rebuke of Attorney General William Barr.

The global number of coronavirus cases surpassed 100,000 today, a day after the director general of the World Health Organization urged international action to confront the outbreak, saying: “This is not a time for excuses. This is a time for pulling out all the stops.”

Here are the latest updates and maps of where the virus has spread.

Related: “Don’t touch your face” has become a common piece of advice, but it’s not an easy habit to break. Keeping tissues handy and keeping your hands busy are among the tricks to help you stop.

Read more about symptoms and the prospects for vaccines and treatments. For an informed guide to the outbreak, sign up for our coronavirus newsletter.

The economic toll of the coronavirus

“Just as the disease poses a particular threat to older patients, it could be especially dangerous for more mature economies,” writes Austan Goolsbee, an economics professor and a former adviser to President Barack Obama.

That’s because economies like the U.S. are dominated by face-to-face service industries, which are damaged when people stay home.

“One of the hardest parts of this,” Elizabeth Warren said as she withdrew from the presidential race on Thursday, “is all those little girls who are going to have to wait four more years.”

The senator’s exit essentially winnows what had been a diverse Democratic field to two white men, and the debate over an enduring question — can a woman win the presidency? — remains unresolved, our politics reporter Lisa Lerer writes in a news analysis.

What’s next: Ms. Warren said she would not endorse anyone right away, but Bernie Sanders and Joe Biden each want her blessing.

Go deeper: Documents uncovered by The Times reveal details about Mr. Sanders’s efforts to establish ties with the Soviet Union when he was the mayor of Burlington, Vt., in the 1980s. The documents also show how the Kremlin hoped to use the relationship to its advantage. In a statement, his campaign said Mr. Sanders was “proud” of his grass-roots diplomatic efforts.

If you have 6 minutes, this is worth it

Growing up inside a quiet zone

Green Bank, W.Va., population 143, is home to the world’s largest fully steerable radio telescope. To protect the sensitive equipment from interference, Wi-Fi is banned, and cellphone signals are nonexistent.

The restrictions have created a unique kind of modern childhood. Above, Jenna Baxter, 13, recently moved to the area from Connecticut: “I’m happier because now I don’t have social media to give me high expectations of not only myself but everybody else around me,” she said.

Suicide attack in Tunisia: Two men blew themselves up near the U.S. Embassy in Tunis today, injuring five police officers and one civilian, according to officials.

Challenge to attorney general: A federal judge said Attorney General William Barr had put forward a “distorted” account of the findings of the report by the special counsel Robert Mueller. Judge Reggie Walton ordered the Justice Department to show him the portions of the report that were censored in the public version so that he could verify the justifications for those redactions.

Snapshot: Above, a Jewish cemetery in the village of Westhoffen, in the Alsace region of France. Such cemeteries have become easy targets for vandals in a region with an uneasy relationship to its wartime past and a tendency to vote far right. The local authorities have organized volunteers to patrol the plots.

News quiz: Did you follow the headlines this week? Test yourself.

Modern Love: In this week’s column, company policy forbade a woman who taught English from getting personal with her online students. Whoops.

Late-night comedy: Elizabeth Warren was “incredibly competent, pragmatic, intelligent and well-spoken — in other words, she never had a chance,” Seth Meyers said.

What we’re listening to: This episode of the “Reply All” podcast, about a man searching for a song that seemed to vanish from the world. “You’ll laugh, you’ll cry and you will not be able to get the song out of your head,” says Tim Herrera, our Smarter Living editor.

Cook: The Times has a mini-documentary on YouTube about the New York chef and restaurateur Millie Peartree, who makes just about the best mac and cheese in the city. We got the recipe.

Listen: BTS’s “Map of the Soul: 7” demonstrates how the superstar K-pop group has grown into a musical monolith — and what it might have to leave behind.

Read: A surreal take on the gig economy is among 11 books we recommend this week.

Smarter Living: If you’re worried about the coronavirus while flying, there are steps you can take.

And now for the Back Story on …

The virus and society

Max Fisher, who writes our Interpreter newsletter, got pneumonia in December — an illness that bears many similarities to the disease caused by the new coronavirus. In his latest column, he used the experience to reflect on how a wider outbreak could affect society.

“It was super unpleasant,” he said. “I was confined to my couch for weeks and, for some stretches, had trouble breathing. But I was basically fine.”

While he was ill, relatives and friends helped him with personal obligations, and Times colleagues did the same for his work. He could see doctors and get prescriptions. All told, he said, the net toll of his illness was negligible.

“That toll was negligible because I’m just one person,” he said. “Society was prepared to absorb the consequences of my illness.”

“If a big fraction of my neighborhood in West London had all fallen sick at once, it would’ve been a different story,” he added. His local health office might not have been able to see him as quickly. Friends and relatives might have had other sick people to help, or been sick themselves.

“The risk from the virus’s impact on you individually is probably low,” he concluded. But its impact on society — particularly on low-wage workers who can’t afford child care or time off — could be profound.

That’s it for this briefing. See you next time.

Thank you
Mark Josephson and Eleanor Stanford provided the break from the news. You can reach the team at briefing@nytimes.com.

P.S.
• We’re listening to “The Daily.” Today’s episode is about the agreement between the U.S. and the Taliban.
• Here’s today’s Mini Crossword, and a clue: Cheese with holes (five letters). You can find all our puzzles here.
• The Times’s National desk starts each of its morning news meetings by reading a poem, which one of our editors said “jolts your mind into thinking about a subject or theme in an unexpected way.”