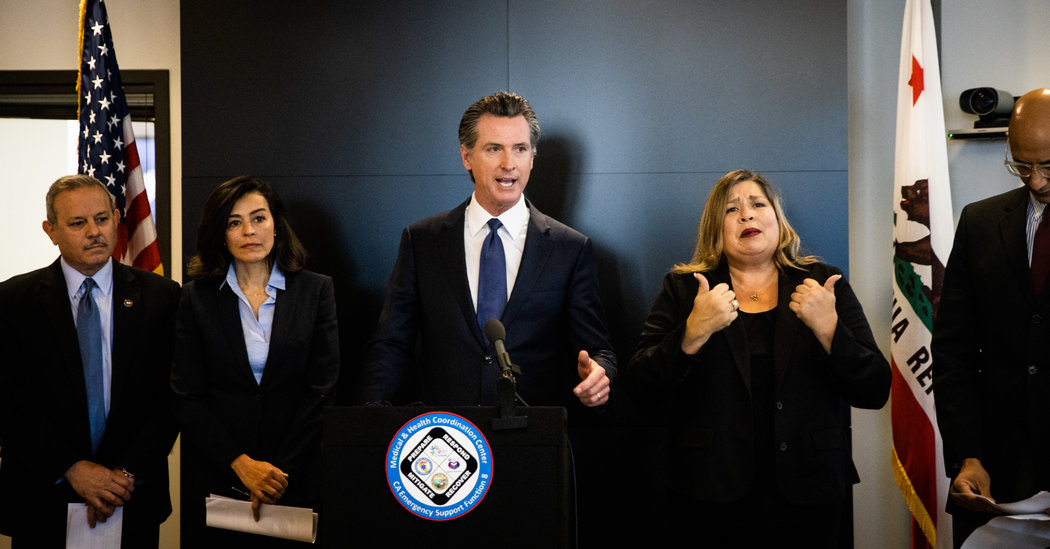 (Here’s the sign-up, if you don’t already get California Today by email.)

The worries about the spread of the coronavirus reached new heights in California yesterday, essentially drowning out all of the state’s other anxieties. (It still hasn’t rained in the Bay Area, for instance.)

[Read the full story about the latest developments on the coronavirus in California.]

Gov. Gavin Newsom announced that there had been 33 cases in California and as many as 8,400 people were being monitored for the virus, but that the state had only about 200 testing kits, which he described as “inadequate.” The C.D.C., he said, had promised to provide more.

My colleagues reported that one of those 33, a Solano County woman, had to wait days to be tested. That woman may also be the first patient in the United States to be infected through community spread — a case in which the source of infection is unknown.

Later on Thursday, The Sacramento Bee reported that a student at the University of California, Davis, was showing “mild symptoms,” and that the student’s three roommates were in isolation.

But although the authorities have emphasized that emergency declarations and other measures are still mostly precautionary, The Los Angeles Times reported that businesses were pulling events out of California and that this weekend’s Korea Times Music Festival at the Hollywood Bowl has been postponed.

Of course, this is all just in California. The outbreak has been a global phenomenon, sending financial markets plummeting and becoming a political cudgel.

Here’s more of The Times’s coverage:

Didn’t register online in time for the deadline earlier this month? No problem; you can go in person on Election Day. Haven’t sent off your vote-by-mail ballot? Fine! (As long as it’s postmarked by Tuesday and gets to your county election office within three days.)

Secretary of State Alex Padilla told reporters on Thursday morning that more than 2.7 million Californians had already voted by mail. He wouldn’t even estimate how many more ballots could be on their way (about 15 million vote-by-mail ballots went out), or how many people will take advantage of the in-person, day-of voter registration.

He did, however, caution that because of all the ways Californians can vote, it may take some time to finish verifying and counting all the ballots. County election officials must report final results to the secretary of state’s office by April 3.

So who’s going to win? That’s a tougher question to answer, but according to CalMatters, if things go according to the polls, Senator Bernie Sanders could win all the delegates chosen by statewide vote.

We often link to sites that limit access for nonsubscribers. We appreciate your reading Times coverage, but we also encourage you to support local news if you can.

If you missed it, here’s more about the arrest last year of the gynecologist, Dr. George Tyndall, and more about the latest on the university’s settlement with his former patients.

Read more about how the smell has permeated communities where growers are trying to cash in on legal marijuana. [The New York Times]

Read all the columns here. [The New York Times]

Last year, around Pride, I wrote about the delicate efforts to keep San Francisco’s L.G.B.T.Q. communities alive and thriving.

On Saturday afternoon, a group of the city’s L.G.B.T.Q. leaders are set to host a march aimed at remembering the city’s Castro district as it once was, as well as highlighting the need to support businesses there today.

“Our community, especially the Castro, relied on locally owned and community-oriented small businesses,” Juanita MORE!, the drag queen and longtime L.G.B.T.Q. advocate, told me recently. “Now with so many threats of eviction and rent hikes, that’s becoming super difficult.”

Ms. MORE! will be helping to lead Saturday’s march — in heels, naturally. The group will be laying black wreaths at the sites of businesses that have closed and rainbow wreaths on queer businesses that are open.

Ms. MORE! said the march is meant as much to “shake everyone” to attention as it is to mourn a bygone era.

“My hope is to, really, reignite hope,” she said.

Whether or not you’ll be out in your heels, it’s worth perusing the list of businesses on the route — like Castro Camera, the camera shop that was run by Harvey Milk — which you can find here.

California Today goes live at 6:30 a.m. Pacific time weekdays. Tell us what you want to see: CAtoday@nytimes.com. Were you forwarded this email? Sign up for California Today here.

Jill Cowan grew up in Orange County, graduated from U.C. Berkeley and has reported all over the state, including the Bay Area, Bakersfield and Los Angeles — but she always wants to see more. Follow along here or on Twitter, @jillcowan.