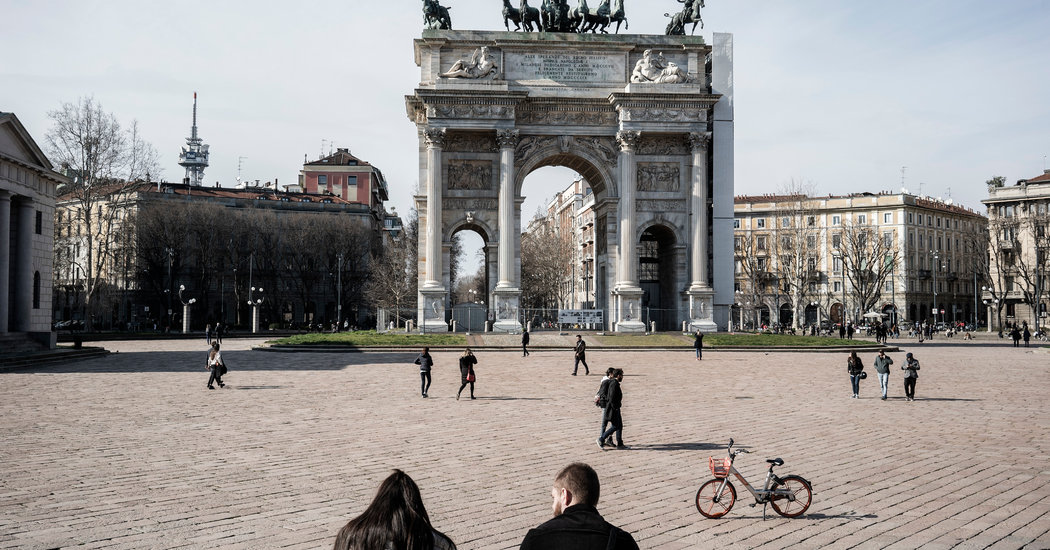 (Want to get this briefing by email? Here’s the sign-up.)

We’re covering updates in the coronavirus outbreak and the latest in the Democratic presidential race. We also explain a dispute over classified portions of the U.S. agreement with the Taliban.

A plunge in stocks to start the week

The Saudi decision was in retaliation for Russia’s refusal to join OPEC in a large production cut as the outbreak continues to slow the global economy.

In the U.S., the number of coronavirus cases has grown to more than 530. On Sunday, the country’s leading expert on infectious diseases, Dr. Anthony Fauci, said regional lockdowns could become necessary and recommended that those at greatest risk — older adults and people with underlying health conditions — abstain from travel.

Here are the latest updates on the virus and a map of where it has spread.

Related: A cruise ship that has been held off California after 21 people aboard tested positive for the virus is set to dock today in Oakland. More than 3,500 passengers and crew members will be taken to military facilities around the country to be quarantined for 14 days. The State Department on Sunday advised Americans against traveling on cruise ships.

Closer look: Dr. Fauci has become the chief explainer of the epidemic, partly because other government scientists have either avoided the spotlight or been reined in by the Trump administration.

News analysis: President Trump, who seems at his strongest politically when he has a human target to attack, has found it harder to confront the threat of an invisible pathogen, our chief White House correspondent writes.

What to know: Here’s how to quarantine yourself if you need to and answers to questions about the virus.

Italians are urged to respect lockdown

As the site of the worst outbreak of the coronavirus outside Asia, Italy has announced strict measures that limit the movements of about a quarter of the population. To bolster the effort, the country’s leaders have appealed to Italians to reject “furbizia,” the sort of cleverness typically channeled into getting around bureaucracy.

“We are the new Wuhan,” one woman in the closed-off northern region of Lombardy said on Sunday.

Go deeper: The lockdown may save lives, but analysts say it will paralyze Italy’s economic heartland and almost certainly tip Europe into a recession.

With the Democratic presidential nominee almost certain to be a man, party activists, elected officials and voters are pushing for a woman to occupy the second spot on the ticket.

On Sunday, Senator Kamala Harris endorsed former Vice President Joe Biden, heightening speculation that she could be selected as his running mate. Mr. Biden and Senator Bernie Sanders, the other front-runner, both say several women are being considered.

Quotable: During a “Saturday Night Live” sketch, Senator Elizabeth Warren was reminded that Mr. Biden and Mr. Sanders were both hoping for her endorsement. “It’s tough,” she said. “Maybe I’ll just pull a New York Times and endorse them both.”

A year ago, Adam Castillejo, above, was introduced to the world as the “London Patient,” only the second person to be cured of H.I.V. Mr. Castillejo, 40, has now chosen to reveal his identity, after realizing that his story carried a powerful message of optimism.

“This is a unique position to be in,” he said. “A unique and very humbling position.”

Secret accord with the Taliban: Two classified annexes to the American deal with the insurgent group set the criteria for a critical part of the agreement: What constitutes enough “peace” for the U.S. to withdraw its forces? The Trump administration has insisted the documents remain secret, though officials have struggled to explain why.

Delay in Mount Everest rules: Nepal’s government said new safety regulations would not be in place for the coming climbing season, which begins in April, because they need further review. Eleven climbers died last year.

Snapshot: Above, protesters clashed with the police in Santiago, Chile, on Sunday during an International Women’s Day march. As part of the global event, hundreds of thousands of people across Latin America demonstrated against inequality, femicide and strict abortion controls.

Pay dispute in women’s soccer: The American team narrowly defeated Spain on Sunday, as the fight over equal pay between the players and the U.S. Soccer Federation grew deeper.

What we’re reading: This architectural deconstruction in The Texas Observer. “Boxy minimalist homes reflect more than aesthetics,” writes the Briefings editor, Andrea Kannapell. “I didn’t realize how much more until I read this.”

Cook: This French onion soup comes from a pamphlet of recipes produced by The Times in 1954. Our Cooking team updated this one by adding sherry and wine for more flavor.

Watch: “Hillary,” a four-part documentary series on Hulu about Hillary Clinton, examines the public fixation with the former first lady and presidential candidate.

Read: In her third memoir, “Untamed,” the Momastery founder Glennon Doyle discusses her divorce from her husband and her marriage to the soccer star Abby Wambach.

Smarter Living: It’s easy to use more data than your wireless carrier’s plan allows. Here’s how to keep your bill under control.

And now for the Back Story on …

Coronavirus by the numbers

Adam Kucharski, who studies the math behind outbreaks for the London School of Hygiene and Tropical Medicine, recently talked to The Times about how people should look at the coronavirus data.

One signal Dr. Kucharski looks for is when the first case in an area is a death: “That suggests you had a lot of community transmission already,” he said.

“Suppose the fatality rate for cases is about 1 percent, which is plausible,” he explained. “If you’ve got a death, then that person probably became ill about three weeks ago. That means you probably had about 100 cases three weeks ago, in reality.”

“Over all, we’re seeing maybe 1 percent of symptomatic cases are fatal across all ages,” he said. “What’s also important is that 1 percent isn’t evenly distributed. In younger groups, we’re talking perhaps 0.1 percent, which means that when you get into the older groups, you’re potentially talking about 5 percent, 10 percent of cases being fatal.”

That’s it for this briefing. See you next time.

Thank you
Mark Josephson and Eleanor Stanford provided the break from the news. You can reach the team at briefing@nytimes.com.

P.S.
• We’re listening to “The Daily.” Today’s episode is about an abortion case at the Supreme Court.
• Here’s today’s Mini Crossword, and a clue: Underneath (five letters). You can find all our puzzles here.
• Parul Sehgal, a Times book critic, talked about her middle-of-the-night reading schedule, her review process and more for The Cut’s “How I Get It Done” feature.