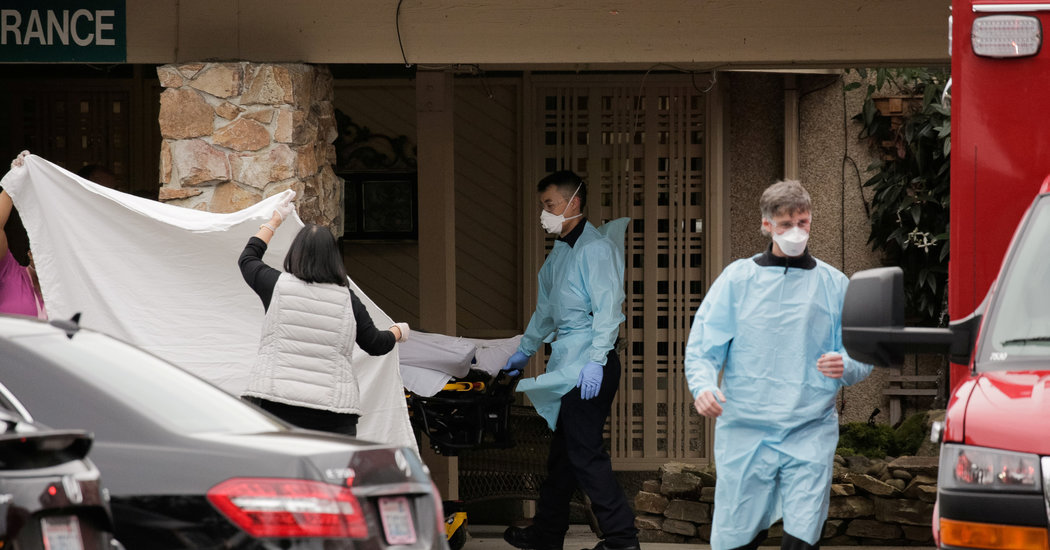 The United States recorded its first two deaths attributed to the coronavirus over the weekend, as states from coast to coast reported new infections leading to a drastic jump in the total number of cases.

On Friday, there were 65 cases and no known deaths in the United States. Fewer than 48 hours later, a single hospital in Washington State reported two deaths, the makings of a cluster, and the total number of cases nationwide jumped 35 percent, to 88.

One state, Florida, declared a public health emergency, even as Vice President Mike Pence, tapped to lead the federal response to the crisis, sought to calm the public’s nerves.

Officials in Washington State said on Sunday that a second person, a man in his 70s with underlying health conditions, had died at EvergreenHealth hospital in Kirkland. That is the same facility where officials identified the nation’s first coronavirus death on Saturday — a man in his 50s. Both men had been residents at nursing facility in Kirkland, run by Life Care Centers of America.

Officials also announced three other confirmed coronavirus cases at the hospital, and another two in hospitals in Renton and Seattle.

Twenty-three cases were announced on Saturday and Sunday in Washington, California, Illinois, Rhode Island, New York, Florida and Oregon. The new cases included a mix of people who had traveled to high-risk countries and those who were believed to have contracted the disease domestically.

“The patient has respiratory symptoms, but is not in serious condition and has been in a controlled situation since arriving to New York,” Mr. Cuomo said in a statement, offering no details on the woman’s whereabouts.

A New York state official said that the positive case was in Manhattan. The case is the 32nd tested from New York. All of the previous cases had tested negative.

No cases are currently outstanding. New York’s state lab was granted the ability to test for the virus on Saturday after an appeal from Mr. Cuomo.

“There is no reason for undue anxiety — the general risk remains low in New York,” the governor’s statement said. “We are diligently managing this situation and will continue to provide information as it becomes available.”

In San Antonio, Texas, a patient who appeared to recover from the coronavirus illness and had been released from a health care facility after having tested negative twice in more than 24 hours was placed back into isolation after a subsequent sample tested “weakly positive,” according to the C.D.C.

Health officials were tracing potential contacts the person had while outside the facility, even though it was not clear that the patient would have been able to transmit the virus.

In a statement, Mayor Ron Nirenberg called the situation “unacceptable” and said he would hold the C.D.C. responsible for allowing the patients to leave the facility.

Similar cases in other countries have raised questions about whether a relapse of the illness is possible. Experts have suggested that fragments of the virus can remain in the bloodstream and be picked up by sensitive tests even after a person’s immune system has destroyed the virus’s capability to infect anyone else. Testing errors could explain the test results.

Stocks rose in Asia on Monday morning as investors made bets that the world’s governments and central banks would step in to help a global economy slammed by the coronavirus outbreak.

But U.S. Treasury prices rose, driving yields lower, in a sign of growing worry in the financial world.

After opening lower, Japanese stocks rebounded, and the Nikkei 225 index was up about 1.4 percent. The rise came after the Bank of Japan, the country’s central bank, said it “will strive to provide ample liquidity and ensure stability in financial markets through appropriate market operations and asset purchases.” It did not announce any specific moves.

Hong Kong shares also rebounded and were trading about 0.9 percent higher. Shares in Shanghai, a market that often gets support from state-linked investment vehicles, was up 2.9 percent.

Yields on the 10-year U.S. Treasury bond fell to 1.08 percent, edging closer to the psychologically important 1 percent threshold. The drop, driven by rising bond prices, suggests investors are still looking for safe places to park their money, as well as the expected move by the Federal Reserve.

The higher opening for stocks followed one of the worst weeks for global markets since the financial crisis, with several major indexes around the world falling more than 10 percent in just a few days — a stunning decline that came as investors grappled with the potential economic toll the outbreak could take.

Which is worse, coronavirus or flu?

The coronavirus and the flu are often compared these days. But what are their basic similarities and differences?

So far, the coronavirus seems to be deadlier. On average, the seasonal flu strain kills about 0.1 percent of people who become infected. Early estimates of the death rate in the coronavirus outbreak’s epicenter in Wuhan, China, have been around 2 percent.

The rate could fall if it turns out that many cases aren’t detected because they are so mild or even symptom-free.

As with influenza, the coronavirus is most dangerous to people over the age of 65, or who have chronic illness or a weak immune system.

One area where the two ailments diverge is treatment. There is no approved antiviral drug for the coronavirus, but several are being tested. For those infected with any viral illness, doctors recommend rest, medicine to reduce pain and fever, and fluids to avoid dehydration. For the flu, doctors can offer four prescription medicines and they tend to work best within a day or two of when symptoms start.

There are no coronavirus vaccinations available, but one may be available in a year or two. Flu vaccines are widely available and generally 40 percent to 60 percent effective.

President Joko Widodo of Indonesia said Monday that the country had detected its first two confirmed cases of the new coronavirus, a mother and daughter who apparently caught the disease from a Japanese visitor.

The mother, 64, and the daughter, 31, were being kept in isolation at a hospital in Jakarta, the Indonesian capital.

Medical experts have been saying for weeks that Indonesia was likely to have cases of the disease and questioned the country’s reluctance to test more for the virus.

Health officials traced the two cases to a 41-year-old Japanese woman who lives and works in Malaysia. She visited the Jakarta area in February and returned to Malaysia, where she began to experience symptoms. She tested positive for the virus last week.

In announcing the two cases, Mr. Joko assured the public that the country was ready to handle the virus, with more than 100 hospitals that have isolation rooms and medical equipment that meets international standards.

Indonesia, the world’s fourth-most populous country, receives about 2 million visitors a year from China, an important source of tourism revenue. Indonesia was slow to cut off direct flights to China after the outbreak there.

As of Saturday, it had tested 143 people for the virus, all of them negative.

Two health care workers in the San Francisco Bay Area tested positive for the coronavirus after they were exposed to a patient now being treated for the virus at a hospital in Sacramento, the authorities said on Sunday.

The workers’ conditions were not immediately available, but public health officials in Alameda County and Solano County said in a news release that the workers were isolated in their homes.

The news came after new cases were reported in both Washington State and Rhode Island. Alex M. Azar II, the health and human services secretary, said on CBS’s “Face the Nation” on Sunday that the government planned a “radical expansion” in testing capacity.

[Do you know anyone who lives or works at Life Care Center in Kirkland, Wash.? If so, please email our reporter, Mike Baker, at mike.baker@nytimes.com.]