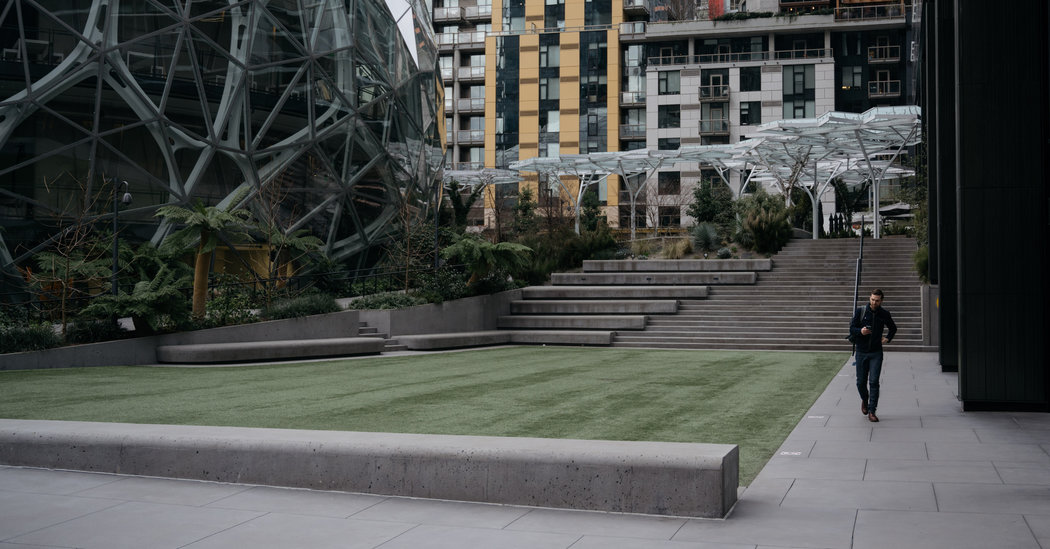 SEATTLE — Just after dawn on Thursday morning, a Microsoft shuttle bus idled at its regular stop in North Seattle — but no passengers were there to board.

The day went on like that: Coffee shop sales were way down. Schools were closed in one suburban area. The downtown was oddly quiet. Traffic was a breeze.

People were hunkering down.

A new reality has set in for the Seattle area, the first region in the United States where the authorities have issued sweeping recommendations that people stay home to slow the spread of coronavirus.

“It is a weird feeling, being ground zero of this thing,” said Anastasia Scrimgeour, a driver for Lyft and Uber who said her income had dropped by half since a week ago, when a wave of reports of coronavirus cases began in the area. “Everyone is scared of Seattle now.”

A day earlier, county officials had urged people to telecommute rather than go to work, and recommended that people 60 or older stay in their homes. People with medical conditions, as well as pregnant women, were also advised not to go out. The city is hardly a ghost town, Ms. Scrimgeour said, but there were definitely fewer people out and about.

“It was so quick,” she said. “Everything just happened in a few days.”

In Washington State, 13 people have died of coronavirus. More than 60 other people have been treated for the virus in the state, leading state officials to declare an emergency.

And in pockets all around Seattle, people were heeding the advice of officials and staying in. Microsoft, Amazon and many other top employers told their employees to work from home. The South Lake Union area, where thousands of tech workers typically fill the streets, was mostly empty. Parking spaces usually all but impossible to find on a weekday were wide open.

“You are starting to feel people are avoiding public areas,” said Angelica Salazar, who brought her baby daughter to a library story time on Thursday.

Story time, usually packed, was not. “Life still has to go on,” Ms. Salazar said.

Michelle Rose, who works the front desk at a hotel west of the city, said she had seen store shelves emptied.

“People are staying home, freaking out,” she said. “We’ve got a whole folder for it — people that are canceling their reservations.”

Jason Foafoa, a finish carpenter, proceeded to work as usual, to a 40-story apartment building, its upper floors still skeletal as the framing and walls go up. There was a change, though, he said. Seattle’s increasingly snarled traffic has all but disappeared.

Two women walked down a sidewalk carrying big computer monitors in their arms. They were heading home to work, as their employer has suggested until at least the end of March.

Their office of about 200 people was down to only a few, some of them packing up their stuff.

At Cascade Coffee Works, located on the ground floor of one of Amazon’s buildings and on a typical weekday full of Amazon workers, the lines had vanished.

“Sales are down 50 percent today,” said Zach Cook, 27, the head roaster at Seattle Coffee Works, which has four locations in the city, including Cascade Coffee.

Mr. Cook said the company’s other cafes were seeing a slowdown in business. “But it’s nothing drastic like this,” he said.

He said there had been no talk of reducing hours or jobs. “Not yet, but likely,” he said.

Kim Kennedy, 26, who works as an aide in a physical therapy clinic in Seattle, had her work hours cut this week, from 36 to 28, as scheduled patients canceled their appointments.

Ms. Kennedy said she was not terribly worried about the virus, although she was washing her hands more often as a precaution. But she did think twice when a recent therapy client casually mentioned being at a hospital that she thought cared for patients with the virus.

“I just said to myself, ‘I’ll not touch anything you touch,’” she said.

Pike Place Market seemed slower than usual for a weekday at noon, though it still had many visitors, strolling past the fish market vendors and flower stalls, buying slices of pizza or bowls of chowder.

“Don’t touch the wall!” shouted Theresa Ray as a friend leaned up to pin a piece of chewed gum on to what is widely regarded one of the city’s most disgusting — and in the best of circumstances, least sanitary — tourist attractions: the Gum Wall. In an alley near the market, mashing a piece of gum to an already covered wall has become a tourist rite of passage.

“It’s gross, but I’m not afraid I’m going to get coronavirus,” said Ms. Ray, a retail assistant manager from eastern Washington who was visiting the city on Thursday after driving three hours for a concert on Wednesday.

Alexis Plutowski, 22, a nursing assistant who was visiting the city on Thursday, said she thought the anxious response to the virus had outstripped what she viewed as the real risk.

“It’s normal with something that people haven’t heard of before,” Ms. Plutowski said. “But more people are dying from the flu than this.”

At one public library, most tables were occupied but not full. Some people stayed away, while others came in search of internet access to telecommute or for public health information, Darth Nielsen, a regional manager, said.

As offices send people home to work, “one of our concerns at the library is that we will be the last ones standing,” Mr. Nielsen said. “People still want connection. People still want to go out.”