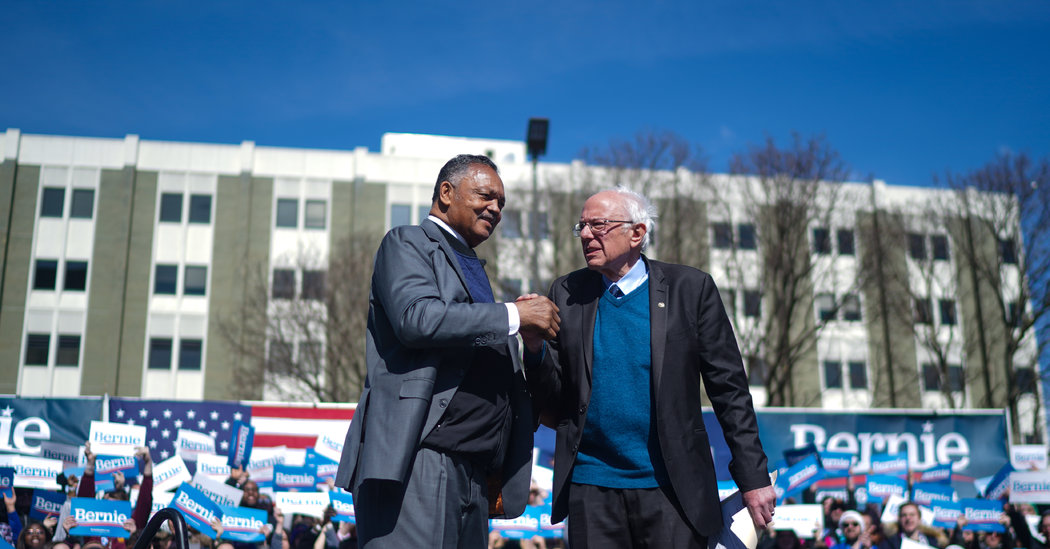 GRAND RAPIDS, Mich. — The Rev. Jesse Jackson endorsed Senator Bernie Sanders of Vermont for president on Sunday, offering support that the senator and his team hope will rally black voters to their side ahead of a make-or-break Democratic primary race in Michigan.

“With the exception of Native Americans, African-Americans are the people who are most behind socially and economically in the United States, and our needs are not moderate,” Mr. Jackson, a longtime civil rights activist and presidential candidate in 1984 and 1988, said in a statement. “A people far behind cannot catch up choosing the most moderate path.”

“The Biden campaign has not reached out to me or asked for my support,” he added. “The Sanders campaign has, and they responded to the issues I raised.”

Speaking before thousand of voters gathered in this Western Michigan city, Mr. Sanders lavished praise on Mr. Jackson, citing his insurgent bid for the White House in 1988, when he became a leading candidate before ultimately losing to Gov. Michael S. Dukakis of Massachusetts.

“It is one of the honors of my life to be supported by a man who has put his life on the line for the last 50 years fighting for justice,” he told a largely white crowd of thousands gathered for an outdoor rally. “Everything that Jesse Jackson said is what this campaign is about.”

Mr. Sanders has cast his two presidential campaigns in the lineage of Mr. Jackson’s 1988 presidential bid, telling advisers in 2015 that he hoped to model his 2016 operation after that effort. Political contemporaries, the two septuagenarian liberal activists are longtime allies: In 1988, Mr. Sanders, then the mayor of Burlington, Vt., was slapped by an “irate citizen” after supporting Mr. Jackson in the state’s caucuses.

Michigan’s caucuses that year marked a high point for Mr. Jackson’s campaign. He beat Mr. Dukakis in the state by building support among black voters and liberal white caucusgoers — a similar coalition to the one Mr. Sanders hopes to rally when the state votes in its primary on Tuesday.

Mr. Sanders hopes that by beating former Vice President Joseph R. Biden Jr. in this Midwestern state, he can reclaim ground in the presidential race after losing a majority of states on Super Tuesday largely on the weakness of his support among black voters. Michigan has emerged as a pivotal moment for his campaign, as the race moves into a series of delegate-rich primaries in Southern and Rust Belt states that are expected to be less favorable ground for Mr. Sanders.

Yet as he has campaigned across the state, he has drawn overwhelmingly white audiences, raising questions about whether his effort is breaking through with black voters who make up a significant share of the primary electorate. At a Saturday night town-hall-style event in Flint, Mr. Sanders largely ceded the stage to African-American activists who attacked Mr. Biden’s record on criminal justice and on housing policies that they argue devastated communities of color in places like that predominantly black city.

“We are going to do everything humanly possible to wipe out all forms of discrimination in the country,” said Mr. Sanders, painting his campaign as a continuation of the “rainbow coalition” coined by Mr. Jackson. “We are sick and tired of systemic racism in America.”

As Mr. Sanders traveled across Michigan, Mr. Biden was also picking up support from prominent black officials. Senator Kamala Harris of California endorsed him on Sunday morning, becoming the latest of his former rivals for the Democratic nomination to get behind his presidential bid.

Mr. Biden campaigned on Sunday in Mississippi, which will also vote on Tuesday. In the morning, he attended services at New Hope Baptist Church, a black church in Jackson. The state’s only Democrat in Congress, Representative Bennie Thompson, who endorsed Mr. Biden last week, introduced him as “the comeback kid.”

Speaking to churchgoers, Mr. Biden gave credit to black voters, who powered him to victory in South Carolina and were a key source of support for him on Super Tuesday as well. “If I’m the comeback kid,” he said, “there’s only one reason I’ve come back: the African-American community all around the country.”

Later, Mr. Biden was scheduled to hold a rally in a gym at Tougaloo College, a historically black institution in Jackson. Mr. Biden was to be joined at the event by a onetime rival for the Democratic nomination, former Gov. Deval Patrick of Massachusetts, who endorsed Mr. Biden on Friday.