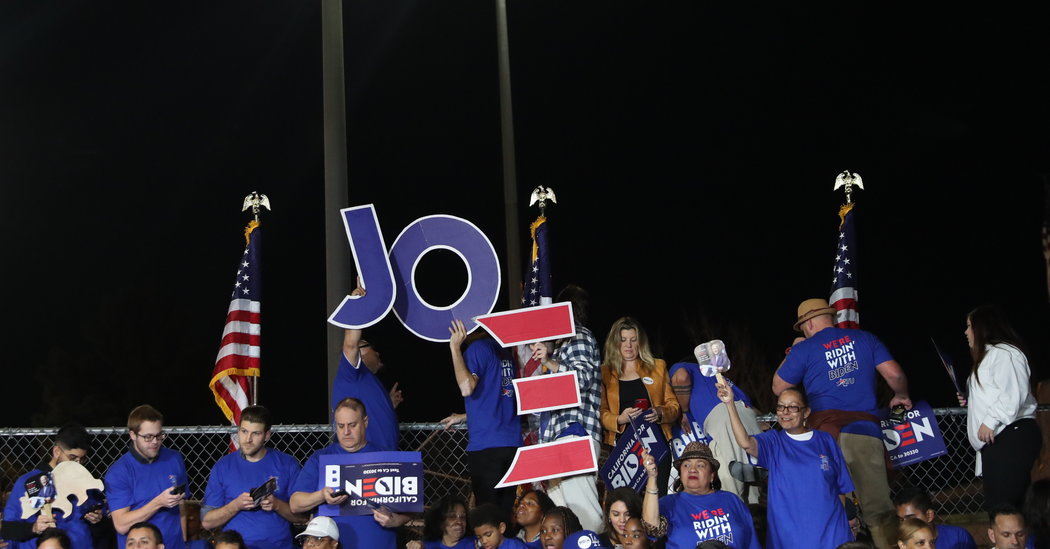 Joseph R. Biden Jr.’s campaign organization in key Super Tuesday states was so flimsy that it shocked and alarmed Democratic Party leaders. Mr. Biden had little cash for advertising on the airwaves. His message just days before the big vote was sometimes unfocused and meandering.

But when 14 states voted on Tuesday, none of that mattered: Mr. Biden swept to victory in 10 of them, reflecting a quickly coalescing moderate wing of the Democratic Party and a desperation among voters to start taking the fight to President Trump.

“There’s no analogous situation that I can think of in presidential politics where a candidate who was really on the brink of extinction came back and, over four days, took command of a race without benefit of media or organization,” said David Axelrod, who served as chief strategist for President Barack Obama. “It’s an unparalleled situation.”

Mr. Biden was greatly aided by the late endorsements of two former rivals, Senator Amy Klobuchar of Minnesota and Pete Buttigieg, the former mayor of South Bend, Ind., who exited the race at the beginning of the week. Mr. Biden’s overwhelming victory in South Carolina last Saturday, powered by African-American voters, injected a stunning dose of momentum into the campaign after losses in the first three nominating contests.

But Tuesday’s results also showed that in a matchup that was largely against Senator Bernie Sanders of Vermont, the less quantifiable elements of Mr. Biden’s campaign — his association with Mr. Obama, his empathy and his more moderate approach to governing — outweighed his lack of organizational heft in many places.

Those operational challenges have not evaporated. Representative Emanuel Cleaver II of Missouri, a Biden supporter, said the campaign had “virtually no operation” in his state, which votes on Tuesday.

Yet as the presidential contest moves into a battle for large, delegate-rich states like Michigan, Ohio, Illinois and Florida, Mr. Biden is racing to cement his advantage with the sprawling coalition that propelled him in the past week — this time with the momentum, money and avalanche of endorsements that had eluded him throughout the race, even as his team scrambles to scale up.

Headed into the next round of contests on Tuesday, when six states including Michigan and Missouri will vote, Mr. Biden is again seeking to run up the score in heavily African-American congressional districts, build on his newfound strength with moderate suburbanites and fight Mr. Sanders for white working-class voters. He is quickly rerouting some staff to key states, uncorking new ad spending and leaning into sharper criticisms of Mr. Sanders, now his chief rival for the nomination.

Mr. Biden’s financial fortunes are rapidly changing: Since last Saturday, the day of his resounding victory in South Carolina, his campaign has raised more than $22 million in online donations — more than double its total fund-raising in the entire month of January. A fund-raiser he attended in Los Angeles on Wednesday was moved outdoors to accommodate the number of people who wanted to come (the guest list included the actor Leonardo DiCaprio and his mother).

Mr. Biden’s surrogates have sprung into action, seeking to help him acquire additional support in upcoming key states through methods both traditional — Ms. Klobuchar was slated to deploy to Michigan for Mr. Biden — and creative: The former U.S. ambassador to Ireland was listed as hosting an organizing event for Mr. Biden in the small city of Bolivar, Mo., last week.

According to his campaign, Mr. Biden has more than 70 endorsements in Missouri, more than 50 in Florida and around 20 in Michigan. Among his newest endorsers in Michigan is Gov. Gretchen Whitmer, who was named a national co-chair of his campaign.

Former Senator Bill Nelson of Florida, a Biden supporter, said the campaign had focused resources on South Carolina out of necessity. But with an eye on the March 17 contest in his own state, Mr. Nelson said, “Now I think you will see a flood of people that will be coming in and augmenting the existing staff in Florida.”

“People like a winner,” added Mr. Nelson, who has been pounding the phones, seeking to get more state legislators on board.

Still, there is limited time to build out the kind of on-the-ground infrastructure that can often make a difference in close races.

In Michigan, Mayor Mike Duggan of Detroit, another Biden supporter, said the Biden campaign was relying on volunteers, and had long made clear that it did not intend to establish a large presence of paid staff in the state.

“They flat-out said we’re not putting field resources in Michigan,” he said, noting that he agreed with their approach. “I told them we’d do the organizing with the volunteers here and we’d be ready to go on March 10, and I think we will be.”

Bill Neidhardt, a Sanders aide in Michigan, said that campaign had 25 paid staff members in the state.

“We’re down to two campaigns: one that has a grass-roots organizing infrastructure that is deployed in multiple states, including here in Michigan,” he said. “Then you have Joe Biden’s campaign, which they seem to be figuring out.”

Mississippi, Washington, Idaho and North Dakota are also holding nominating contests on Tuesday. In contrast to 2016, Washington and Idaho Democrats have now embraced primaries — not caucuses, which tend to draw only the most committed activists — a move that some Biden allies hope will allow him to cut into Mr. Sanders’s potential advantages in those states, both of which he won handily in the previous presidential race.

On Thursday, Mr. Sanders canceled a rally in Mississippi, a state with a heavily African-American Democratic electorate, redeploying instead to delegate-heavy Michigan, where he and Mr. Biden look poised for a fierce fight over the blue-collar workers that helped Mr. Sanders narrowly win the state in his 2016 presidential bid.

Mr. Biden and Mr. Sanders have criticized each other during the primary race — over Mr. Biden’s vote to authorize the war in Iraq, for example, or Mr. Sanders’s record on gun control — but they now both appear willing to wage their most pointed fights to date. Mr. Sanders has released ads jabbing Mr. Biden over his position on trade, and his past support at times for Social Security freezes — reviving a fight the two men had in Iowa that Mr. Sanders’s allies believe played to his advantage.

Mr. Sanders also released an ad highlighting his ties to Mr. Obama, a move that drew incredulity from some of Mr. Biden’s supporters who note not only Mr. Biden’s service as vice president under Mr. Obama, but also that Mr. Sanders reportedly weighed a primary challenge to Mr. Obama in the 2012 election.

“I’m sorry, what?” Senator Chris Coons, Democrat of Delaware and a strong Biden supporter, said when asked about the ad. “Senator Sanders seriously considered primarying Barack Obama in 2012 and routinely criticized him and his proposals. So if this is a race between former Vice President Biden and Senator Sanders as to who has the experience and the vision that moves forward the Obama-Biden agenda, it’s undeniably Joe Biden.” Mr. Sanders has denied that he considered challenging Mr. Obama.

Mr. Sanders won a surprise victory in Michigan in 2016 when competing against Hillary Clinton, whom he criticized over her support for trade deals like the North American Free Trade Agreement, or NAFTA. That is an issue that plays to Mr. Sanders’s strengths with white working-class voters, a constituency over which he and Mr. Biden battled intensely in Iowa, where Mr. Biden came in fourth.

Mr. Biden voted for NAFTA as a senator, giving Mr. Sanders ammunition to raise the issue of trade in this year’s primary as well.

Mr. Neidhardt promised a “precise, specific” conversation around the economy.

Mr. Biden has been endorsed by the Michigan Democratic Party Black Caucus, and party leaders in the state say he also has a growing opportunity with moderates who had gravitated to other candidates like former Mayor Michael R. Bloomberg of New York, Ms. Klobuchar and Mr. Buttigieg. They also note his work on the auto industry bailout as part of the Obama administration, and his own blue-collar background, which helps him connect with working-class voters.

Mr. Duggan, the Detroit mayor, suggested that affection for Mr. Biden would make up for the campaign’s lack of staff in his state.

“Their strategy was Nevada, South Carolina and Super Tuesday, but they got a lot of deeply loyal individuals like me, and we’ll see how the campaign performs in the next week,” he said. “But I feel confident that what you had here were people who were with Biden because they love Biden. And that’s been paying off around the country.”