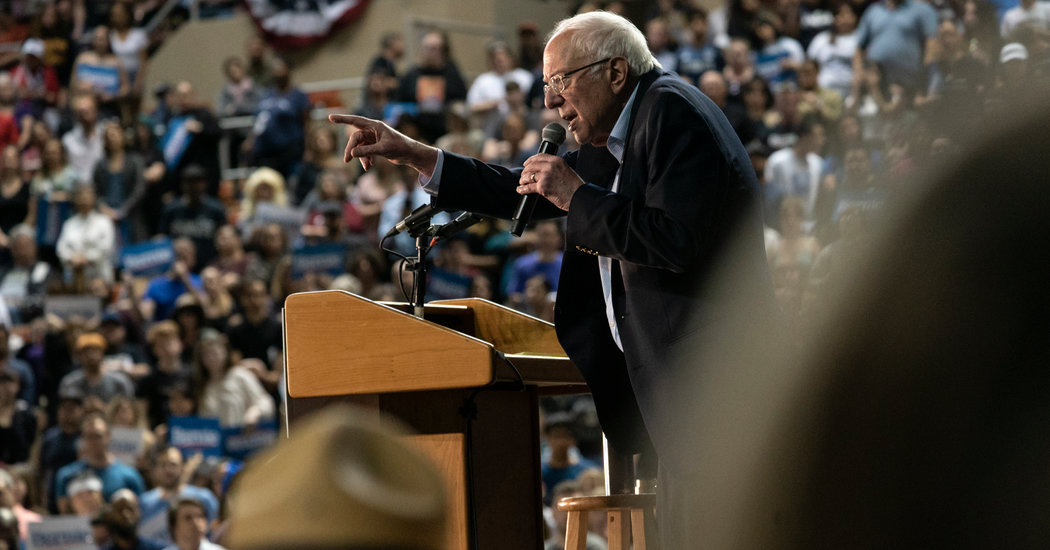 Calibrating his approach for a tough head-to-head primary matchup in a year when many Democratic voters want to put up a united front, Senator Bernie Sanders of Vermont on Friday renewed his attacks on former Vice President Joseph R. Biden Jr.’s record while conceding that Mr. Biden could also defeat President Trump.

Mr. Sanders, speaking with reporters in Phoenix, spent several minutes ticking off what has become a standard list of criticisms: He condemned Mr. Biden’s votes as a senator on trade agreements and past statements on Social Security while also brandishing new attacks over federal funding for abortions, same-sex marriage and the former “don’t ask, don’t tell” policy.

But in a sign of the careful approach both candidates are taking while seeking to draw distinctions between their campaigns, Mr. Sanders reiterated multiple times that he would support Mr. Biden if he eventually won the presidential nomination, and, pressed by a reporter, said he believed Mr. Biden could beat Mr. Trump in November.

“I think we are the stronger campaign to defeat Donald Trump, but you have not heard me say that I think that Biden cannot defeat Trump,” Mr. Sanders said. “I will certainly do everything I can if he is the nominee.”

Coming off a series of disappointing defeats on Super Tuesday — after which two other major candidates quit the race — Mr. Sanders focused his message around the one person left in the Democratic race standing in his way. He has relentlessly and repeatedly contrasted himself with Mr. Biden in recent days, and his campaign has released new ads doing the same.

“As we enter the moment in this campaign where we come down to a two-person race, I think it important for us to differentiate our records, and I intend to do that,” Mr. Sanders said.

“Joe has been around for a long time; so have I. And I think people would want to take a look at those records,” he added. “All I can tell you, whether it’s Iraq, whether it’s DOMA, whether it’s ‘don’t ask, don’t tell’ — those were difficult votes. I was there, on the right side of history, and my friend Joe Biden was not.”

He was referring to the Defense of Marriage Act, which defined marriage as a union between a man and a woman, and the policy that prohibited openly gay people from serving in the military.

As a senator, Mr. Biden supported a broad defense bill in 1993 that included the “don’t ask, don’t tell” policy, but also voted for a failed amendment that would have removed the policy from that bill. He also voted for the Defense of Marriage Act in 1996.

But as vice president, he said in an interview on “Meet the Press” in 2012 that he was “absolutely comfortable” with same-sex marriage, a stance that was ahead of the Obama White House’s policy at the time.

Mr. Sanders also offered a fresh critique on Thursday of Mr. Biden’s record on the Hyde Amendment, which bans federal funding for most abortions. Until June of last year, Mr. Biden had supported the measure, which critics say disproportionately affects poor women and women of color. He reversed his position after sustaining attacks early in his campaign.

“At a time when women are under severe political assault,” Mr. Sanders said, “I think people all over this country — women and men — are going to look at the record of which candidate has been consistent and strong in terms of defending a woman’s right to choose. On this issue, Joe Biden repeatedly voted for the Hyde Amendment.”

Mr. Sanders has watched his delegate lead evaporate after the first three nominating contests as Mr. Biden racked up wins in South Carolina and several Super Tuesday states, including some that Mr. Sanders had hoped would wind up in his column. Moving forward, the two candidates will essentially go head-to-head next week in six states including Michigan, which will present one of their first tests in a general-election swing state.

On Thursday, Mr. Sanders addressed concerns about turnout by young voters, who he has maintained will be critical to both his primary campaign and to Democrats’ chances of defeating Mr. Trump in November.

Noting that overall voter turnout went up in several states, he emphasized that in many places more young voters had gone to the polls than in 2016 — even if, as a percentage of the total, that demographic did not keep pace with the broader surge.

Asked if he was running out of time to expand the electorate as he has so often promised to do, Mr. Sanders was circumspect: “Well,” he said, “we’re doing the best that we can.”

Mr. Sanders, who is Jewish, also addressed an episode at his rally in Phoenix on Thursday in which a man in the crowd unfurled a flag bearing a swastika before being removed. “It is horrific,” Mr. Sanders said. “It is beyond disgusting to see that in the United States of America there are people who would show the emblem of Hitler and Nazism. And I was shocked to learn about that.”

Separately, Mr. Sanders acknowledged that his team had communicated with federal authorities about the possibility of Secret Service protection for him. Some Democratic lawmakers have called for added security after Mr. Biden’s Super Tuesday address was disrupted by protesters who were able to gain access to the stage.