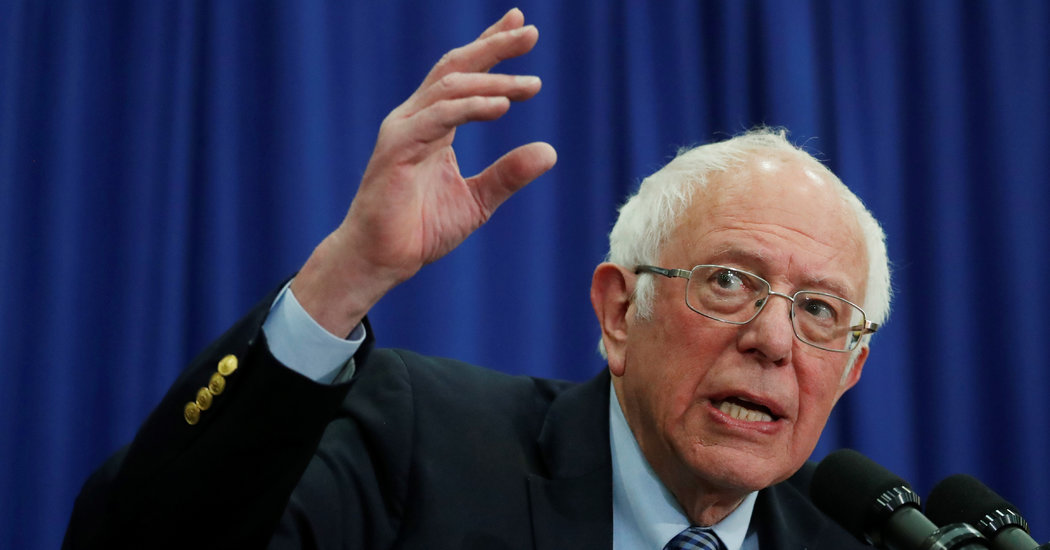 An African-American pediatrician praised Mr. Sanders’s health care plans, describing how “black lives matter so much” to the senator.

Amid this parade of support at a Flint town-hall-style event on Saturday night, Mr. Sanders looked on, largely silent — at least when it came to wooing the black voters whose strong backing of a rival candidate could once again cost Mr. Sanders the Democratic presidential nomination.

Sanders campaign aides had billed the event as an opportunity for him to make a case directly to black voters for why they should support him over Mr. Biden. But the audience ended up being overwhelmingly white, and Mr. Sanders made so few overtures directly to black voters that the event seemed unlikely to pull large numbers of African-Americans away from Mr. Biden.

Mr. Sanders’s relative silence was deliberate, those involved in the event said. The guest speakers — several of whom were flown into Flint by the campaign — decided before the event that it would be better to let them discuss the issues affecting their communities than the man running for president to represent them.

Mr. Sanders opted not to deliver the speech that he had spent much of the day crafting, according to aides, who declined to describe the message he had hoped to communicate.

Instead, he was left asking questions of the panelists, in effect turning over his campaign message to others like Mr. West, the fiery celebrity academic, Harvard professor and fixture on the left.

“Dr. West, do you think given the reality of the condition of the African-American community right now that supporting a status quo, same-old, same-old type of politician is going to address these issues?” Mr. Sanders asked.

Mr. West, who described Mr. Biden as a “neoliberal centrist,” responded with his own question, wondering why “brother Bernie” wasn’t getting more support among “chocolate” voters.

“The neoliberalist who all of a sudden now is coming back to life, and the catalyst was my own black people. Oh, I’m so disappointed,” he said. “What has happened to our black leadership? Some have just sold out.”

The decision to let the panelists provide the message was an unusual one, particularly for a candidate who has cast his campaign as a multiracial coalition that can mobilize a movement of working-class Americans.

“He didn’t want to speak on behalf of people of color when there were people of color on the panel,” said Mike Casca, a campaign spokesman. “Bernie does not have those experiences. He’s a white Jewish man.”

The event itself was an acknowledgment that Mr. Sanders is still struggling to improve his standing among black voters four years after he lost his first run for president in part because of his inability to gain their support.

In Flint, Mr. Sanders drew only a smattering of nonwhite voters to his Saturday night event, advertised as a “racial and economic justice town hall” with the candidate.

Five years after Michigan switched Flint’s water supply to the contaminated Flint River from Lake Huron, the city is still dealing with the aftereffects of the lead crisis, which exposed nearly 30,000 schoolchildren to a neurotoxin known to have detrimental effects on children’s developing brains and nervous systems. Neurological and behavioral problems — real or feared — among students are threatening to overwhelm the education system.

Those lingering challenges were not given significant attention during Mr. Sanders’s remarks.

Aides say Mr. Sanders is still working to improve his standing with black voters, admitting that winning Michigan — a state where African-Americans make up a significant portion of the Democratic primary electorate — will be an uphill climb. Exit polling and survey data indicate that Mr. Sanders is also facing declining support among working-class white voters.

Some voters said they recognized the challenge Mr. Sanders faces in their state.

“I’m nervous,” said Kori Chase, 32, a home health aide. “I really want the people that have supported him vocally to really show up because that’s really what it takes.”

During a 30-minute stump speech, Mr. Sanders did not hold back on Mr. Biden, issuing a series of attacks on the former vice president’s record on trade, Social Security cuts, abortion rights, same-sex marriage and the war in Iraq.

But when it came to racial issues, Mr. Sanders made only one direct reference, arguing that “status quo politics” had “failed the African-American community.”

His panelists were far less restrained. They delivered a series of searing attacks on Mr. Biden’s record on race.

“We fought for the liberation of our people,” said Jennifer Epps-Addison, the president of the Center for Popular Democracy, a liberal think tank. “We need to elect a candidate who understands that the crime bill is wrong, who is going to repeal and replace it and Senator Sanders has made that commitment to our community.”