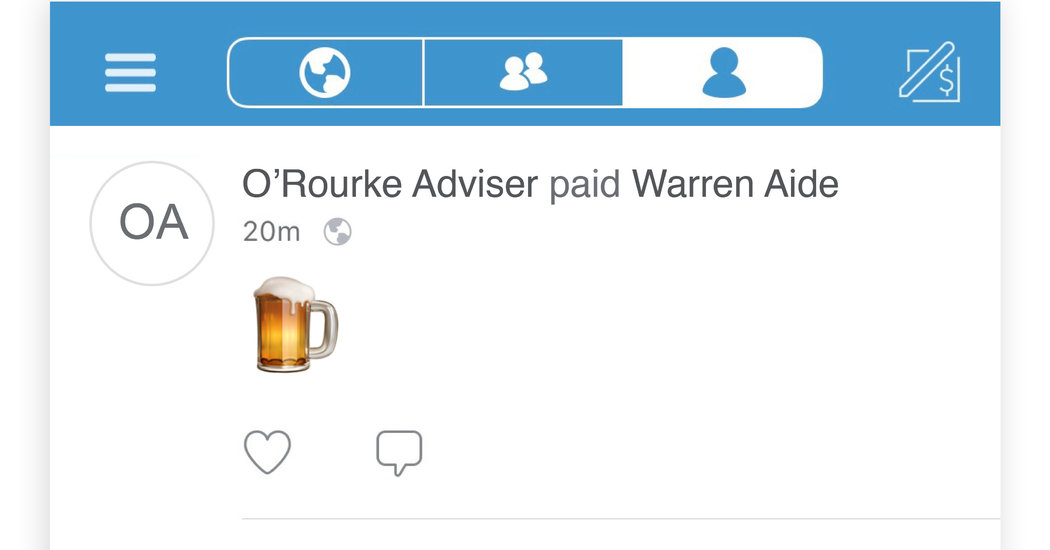 “It is very appreciated and I intend to use it on junior staff,” Mr. Hayden said in an interview from the bar at about 5:30 p.m., where his table of colleagues had instructed the waitstaff not to let the beer pitchers run dry. “I did not know about this!”

Some operatives have already gone through the exercise twice, having jumped from one losing 2020 campaign to another. Such is life in a race where an unwieldy 28 Democrats ran for president, and only three remain.

“The first one I got was when Beto dropped out,” said Aleigha Cavalier, who was former Representative Beto O’Rourke’s national press secretary. Her friend, Hannah Bristol, a Warren aide, sent her an unsolicited $10 that day (“For a drink or Nutella”).

Ms. Cavalier went on to work for Deval Patrick, the former Massachusetts governor, in his last-minute bid. When he quit in February, she got more cash via Venmo. So when Ms. Warren exited the race, she returned the favor. “We’re family,” Ms. Cavalier said of a cross-campaign culture of respect. “You take care of each other.”

Anecdotally, Democratic campaign professionals reported fewer funds flowing to aides of Mr. Bloomberg when he dropped out. After all, the self-funding multibillionaire had been treating aides to campaign-issued Apple laptops, catered meals, furnished Manhattan apartments and salaries that dwarfed the rest of the field. He spent more than $550 million on advertising alone.

On Wednesday, Mr. Bloomberg’s team decamped to the Hard Rock Cafe in Times Square after he quit the race. The former mayor himself showed up and stayed for hours, taking pictures with those who wanted them. There was no need for Venmo; the billionaire’s campaign covered the tab.

The amount of money being deposited is not insignificant.

Addisu Demissie, who was Senator Cory Booker’s campaign manager, said he had sent out about $600 on Thursday. When Mr. Booker dropped out, he similarly received hundreds of dollars, all unsolicited.