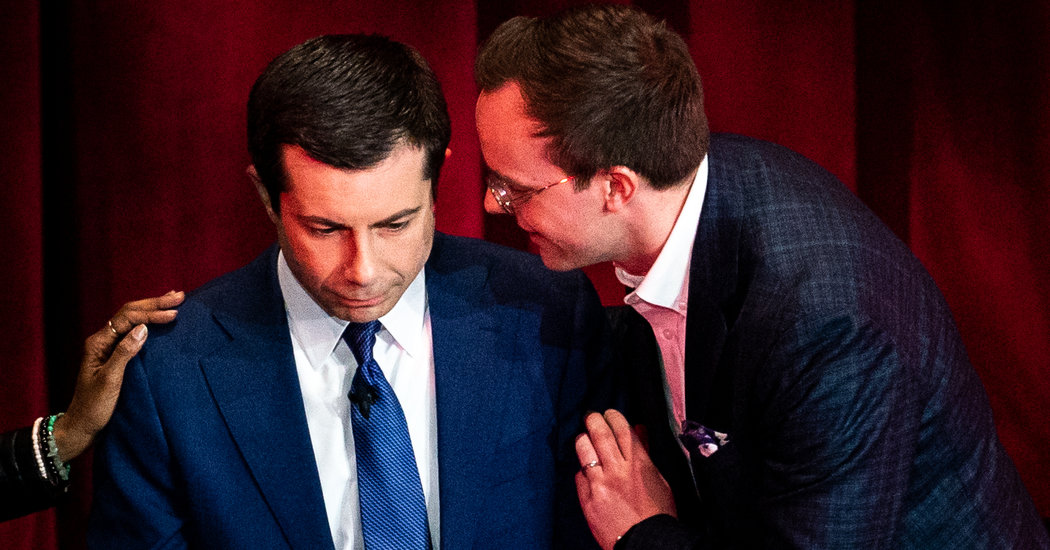 It was the question that followed former Mayor Pete Buttigieg everywhere he went when he first announced his presidential campaign: Is the country really ready to send a gay man to the White House?

But soon, it seemed, the novelty wore off. Many saw that as a sign of progress: Part of the reason his campaign was such a big deal, they said, was that it wasn’t a big deal what his sexual orientation was.

Instead, other questions arose around Mr. Buttigieg’s prospects of winning. What does the mayor of the small Midwestern city of South Bend, Ind., know about being president? Why isn’t he connecting in a more significant way with African-American voters? Would he be able to unify the fractured Democratic Party? Some gay, lesbian, bisexual and transgender activists, many of them young and nonwhite and far to the left of Mr. Buttigieg, started to ask whether he really represented their interests.

In certain progressive circles, in online commentary and in much of the national media, the history-making aspect of Mr. Buttigieg’s campaign often warranted only a passing and perfunctory mention. And the sprawling, diverse Democratic field featured plenty of other potential firsts, including six women, one of them African-American, a Latino man and two Jewish men.

But many, especially those who have fought for L.G.B.T. equality for decades and have seen society grow more tolerant but not entirely accepting, say that Mr. Buttigieg’s contribution to history will be misunderstood and diminished if the main takeaway is that the first openly gay man to have a serious shot at the presidency elicited a collective shrug from a country, as if the country had moved on from its homophobic past.

Roberta Kaplan, who argued the 2013 Supreme Court case that overturned a federal law limiting recognition of marriage to heterosexual couples, Windsor v. United States, said in a tweet last week shortly after Mr. Buttigieg ended his campaign that she was still in awe that he got as far as he did.

If you had asked her seven years ago whether an openly gay candidate could credibly run for president in 2020, she wrote on Twitter, “I would have said you were nuts.” In an interview a few days later, Ms. Kaplan said she was still just as struck by Mr. Buttigieg’s success. But just as surprising, she said, is “that there’s a failure to understand history — and a very recent history.”

“On the one hand, people over-assume acceptance and equality. And on the other hand, there is no question the L.G.B.T.Q. movement has achieved equality at a speed that probably no other modern movement has,” Ms. Kaplan added. “And those things kind of have to live in tension.”

Mr. Buttigieg felt that tension constantly during his campaign, existing in between what were essentially two realities. One was the reality of certain progressive activists, rival Democrats, social media and many of the reporters who covered him, which was focused on why he shouldn’t or couldn’t win the nomination, his supporters said.

“The too-isms always followed him,” said Tom Sheridan, a consultant in Washington who has worked with Congress to expand legal protections for people with AIDS and disabilities. “He was too young, too straight-acting, too boring, too inexperienced because he was mayor of a city that was too small.”

To many who felt a sense of empowerment from his campaign, though, those misgivings felt disconnected from their reality.

Mr. Buttigieg described the gratitude and optimism he often encountered when he was traveling the country, and acknowledged it was so powerful it took him aback at first. “Even I thought, ‘OK, maybe this is not all that much of an event,’” he said in an interview last year.

Strangers would approach him and try to convey how much it meant to see someone so public and so prominent talk about his experience as an L.G.B.T. person. One was just 9, a boy in Denver who told Mr. Buttigieg at a rally a few days before he dropped out of the race, “I want to be brave like you,” and asked, “Would you help me tell the world I’m gay, too?”

Sometimes they were much older, like the flight attendant who was so overcome with emotion when he encountered Mr. Buttigieg at an airport that he was unable to speak. “He just made eye contact and came to the point of tears,” Mr. Buttigieg recalled. “And then walked off not knowing what else to do.”

Even in 2020, part of the paradox of running a successful campaign as an openly gay man meant that his orientation could not define him to voters who might not fully accept it. He understood this, and ran his campaign in a way that always sought equilibrium. The protective armor against his sexual orientation seemed in many ways to be his résumé. He was “Mayor Pete” the Rhodes Scholar, Navy veteran, pianist and technocrat conversant in eight languages.

In this sense, he too is responsible for the way his sexual orientation was downplayed.

But the backlash he faced from fellow Democrats and liberal activists limited his ability to control his campaign’s narrative — a reality of presidential politics that is hardly unique to him. Senator Elizabeth Warren’s early days as a candidate, for instance, were dominated not by questions over her proposed wealth tax or other policy initiatives she wanted to discuss but over her claims of Native American heritage.

Mr. Buttigieg had to answer tough criticism from African-American residents of South Bend who said they felt marginalized and neglected. And as he acknowledged, his explanations weren’t always sufficient.

These criticisms made him seem like a poor fit for a generation of younger liberals who are deeply concerned about issues of racial justice and inequality. Progressives said they felt he didn’t speak for them; they sometimes heckled him at his events.

Many of his defenders said the media and other Democrats focused too aggressively on his inability to attract more support from black voters, a problem other candidates like Ms. Warren and Senator Amy Klobuchar all faced.

“Why was Pete singled out for a problem that other candidates were having?” said Joel Benenson, the Democratic strategist and pollster who worked for the Obama and Hillary Clinton campaigns and whose firm consulted for Mr. Buttigieg. Mr. Benenson pointed out that even after Mr. Buttigieg came in first in the delegate count in the Iowa caucuses and a close second place to Mr. Sanders in New Hampshire, large percentages of the country still did not know much about him, making judgments about his inability to attract entire demographics premature.

After Iowa, he was viewed more favorably than unfavorably in a poll of registered voters nationwide by Quinnipiac University. (This was not true for Ms. Warren and Mr. Sanders, the poll found.) But almost a third of those surveyed said they had not heard enough about him to form an opinion.

“This guy, a mayor of a city of 100,000 people, was coming in first and second. And he’s not even nationally known,” Mr. Benenson added, which is an achievement he said was also glossed over.

His supporters also argued that skeptics placed an unfair focus on how Mr. Buttigieg would perform in South Carolina, turning a small, conservative and highly religious state into a definitive proxy for his support among African-American voters nationwide. They also pointed to some statewide polling that indicated voters there would find it difficult to vote for an L.G.B.T. presidential candidate.

“We have a long ways to go in the South and with the church,” said Rev. T. Anthony Spearman, president of the North Carolina N.A.A.C.P. and a proponent of L.G.B.T. rights. Asked if he thought an openly gay or lesbian person could be elected president, Mr. Spearman said yes. “With Mayor Pete, I think down the road we’ll see how much of an impact his running will affect us.” Asked if Mr. Buttigieg could have won his state, Mr. Spearman said he wasn’t so sure.

Though first-of-their-kind campaigns often fall short, they can make progress in other ways. Robert Raben, a Democratic consultant who works on liberal causes and diversity initiatives, likened Mr. Buttigieg’s campaign to the moment in 1984 when Jesse Jackson stood onstage with his family at the Democratic National Convention. He had run for and lost the Democratic nomination that year, and yet his speech was watched by some 33 million viewers.