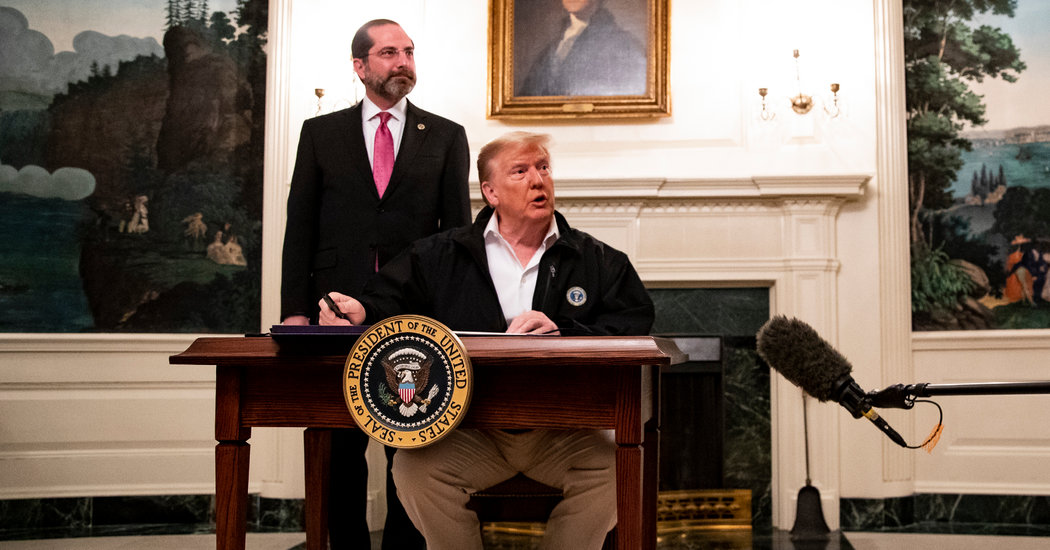 Vice President Mike Pence announced on Friday that 19 crew members and two passengers of that ship, which is idling off the cost of San Francisco, had so far tested positive for the coronavirus. A plan had been made to bring the ship into a noncommercial port, he said.

Dr. Robert R. Redfield, the C.D.C. director who led the president on a tour of his facilities along with Steve Monroe, the associate director for laboratory science and safety, said the government still hoped to control the spread of the virus to prevent a pandemic. “This nation should not give up on containment,” Dr. Redfield said.

The Trump administration gave conflicting explanations of the on-again, off-again trip on Friday morning. A White House official initially said the president had canceled the visit because he did not want to interfere with the work at the centers as its staff scrambled to get a grip on the virus. But then Mr. Trump told reporters it was called off because of a suspected case of coronavirus at the C.D.C. itself.

The C.D.C. is at the nexus of an extraordinary crisis as the number of coronavirus cases worldwide has surpassed 100,000. In response to the outbreak, investors are dumping stocks, businesses and nonprofit organizations are canceling conventions, travelers are calling off spring break vacations, airlines and hotels are laying off workers and schools are suspending study abroad programs.

As of Friday evening, the authorities had reported more than 300 coronavirus cases in the United States, and at least 17 people have died. The first cases near the nation’s capital were reported Thursday in a Maryland suburb.

The C.D.C. response has generated concern and criticism among many health experts, who have complained that the agency was slow to react to the spread of the infection and imposed overly restrictive guidelines early on about who could be tested. Mr. Trump himself has come under fire, as well. Among those who lined his motorcade route in Atlanta were people holding up signs that said, “Have Faith in Science” and “We Need a Vaccine Against Trump.”

Even now, testing remains a major challenge. Officials told Mr. Trump that about 700,000 testing kits had already shipped and that it would grow to four million by the end of next week. “Anyone who wants a test can get a test,” the president said after his briefing.