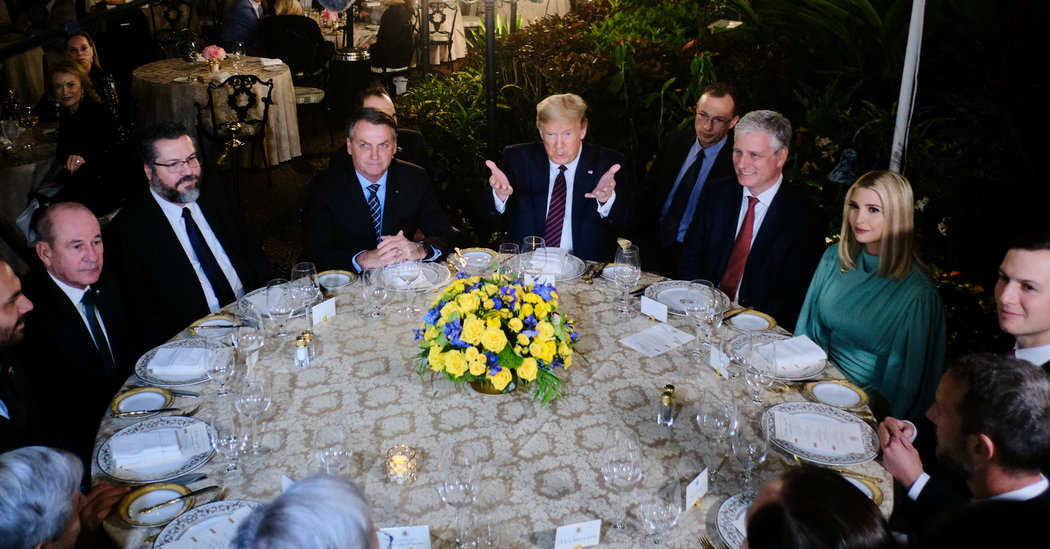 PALM BEACH, Fla. — President Trump hosted President Jair Bolsonaro of Brazil for a festive dinner at his Florida estate on Saturday but refused to rule out steel and iron tariffs that have created tension in the relationship between the two most populous countries of the Western Hemisphere.

As he welcomed Mr. Bolsonaro to Mar-a-Lago, Mr. Trump hailed his Brazilian counterpart and celebrated their friendship. “Brazil loves him,” the president said with Mr. Bolsonaro at his side. “The U.S.A. loves him. Great job.”

Asked about tariffs, Mr. Trump initially ducked the question, saying only, “The friendship is probably stronger now than it’s ever been.” Pressed if he would forgo tariffs, he said, “I don’t make any promises.”

Mr. Trump and Mr. Bolsonaro enjoy one of the closest relationships that the president has in the Western Hemisphere. A conservative advocate of immigration restrictions like the American leader, Mr. Bolsonaro is often called the Trump of the Tropics and his son, Eduardo Bolsonaro, has made a point of visiting Mar-a-Lago on his own more than once to rub shoulders with top Trump administration officials and allies.

Eduardo Bolsonaro sat with his father at the president’s table on Saturday night, joined by Ivanka Trump and Jared Kushner on the other side, along with Robert C. O’Brien, the national security adviser. The elder Mr. Bolsonaro made no comments during the brief periods when reporters were brought in to record the scene.

An administration official said before the dinner that Mr. Trump would use the visit to increase international support for ousting President Nicolás Maduro of Venezuela in favor of the opposition leader Juan Guaidó. The two would also discuss a trade agreement and forest conservation, the official said.

Mr. Bolsonaro is scheduled to visit the United States Southern Command headquarters in Miami on Sunday and then head onto Washington, where he will showcase agreements on energy and infrastructure finance.

Mr. Trump threatened to impose metals tariffs on Brazil and Argentina in December in retaliation for what he called their unfair weakening of their currencies and agricultural policies. The president backed off the threat a couple of weeks later after Mr. Bolsonaro called him to appeal not to proceed with the levies.