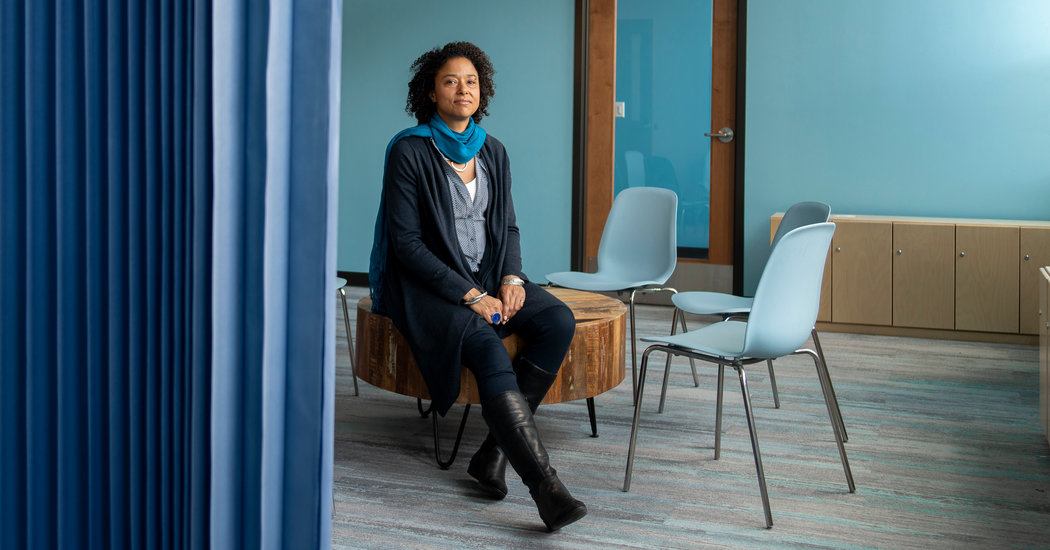 Vicente Martinez, 18, was apprehensive the first time he visited the former drug house in Syracuse, N.Y. The building had been transformed into the Center for Court Innovation’s peacemaking program, where issues can bubble up and be resolved outside of the traditional criminal justice system. “I was messing up a lot,” Mr. Martinez recalled of his two previous stints in jail for driving a stolen vehicle across county lines. “I was doing dumb kid’s stuff.”

The Syracuse peacemaking project encourages a non-adversarial approach. Joining Mr. Martinez in chairs arranged in a circle was his father, Robert, who was incarcerated for bank robbery at roughly the same age as his son. He was desperate for Vicente to avoid the same downward trajectory.

For nearly a year, difficult conversations between son, father and other family members took place in a serene setting with sky-blue walls, pine floors, a communal kitchen and lots of natural light. These touches came out of a community design process led by Deanna Van Buren, an architect who has dedicated her career to rethinking the architecture of justice.

“It’s a very calming space so I felt comfortable opening up,” Vicente observed. “It’s like a base in a baseball game — a safety spot.”

For Robert Martinez, the Syracuse setting offered an opportunity for his son to stay on the right track by doing well in school and avoid further run-ins with the law.

Ms. Van Buren, 47, co-founder of the Oakland-based nonprofit firm Designing Justice/Designing Spaces, has committed her architecture practice to the question of “what a world without prisons could look like,” the title of her popular TED Talk. Her projects include the reimagining of a fortresslike detention center in downtown Atlanta that is in the process of closing, as well as a mobile refuge on wheels in San Francisco for women who have been released from jail at night. (The refuge was intended to keep the women safe from sex traffickers and other predators.)

The mobile refuge came from ideas generated by about 60 women at the San Francisco County Jail. Tapping into the voices of vulnerable people helps root Ms. Van Buren’s designs in everyday realities. “I thought they were going to want beds,” Ms. Van Buren said of the refuge. “But they wanted recliners, a place to change their clothes and do their hair and get a little food.” It’s a homey place with India print curtains, decorative wood flourishes, and stylish upholstery.

Ms. Van Buren’s path to Designing Justice/Designing Spaces was circuitous: Growing up in a split-level house in a white gated community, she recalls as a young woman feeling “tribeless.” not feeling fully at home in either white or black culture.

She was five years old when her family moved into a segregated neighborhood in rural Virginia. Ms. Van Buren’s father, a retired pipe organist and music professor, would drive past the imposing white-porticoed courthouse with his daughter and warn his little girl to stay out of trouble because the justice system was a perilous trap if you were black. His words instilled her with fear. Years later, they would inspire her to wonder whether the punitive image of justice conveyed by her father could be creatively transformed.

Her efforts have dovetailed with growing public acknowledgment of racial bias inherent in the criminal justice system. Laws intended to chip away at this include “ban the box” legislation removing criminal record checks from job applications, bail and sentencing reform, and the full or partial decriminalization of marijuana possession in many states. Criminal justice experts said the dysfunction of the system led to the high-profile decision to close Rikers Island in New York. Judge Jonathan Lippman, who was once the leader of the New York Court of Appeals, described the prison as “a powerful symbol of a discredited approach to criminal justice.”

Ms. Van Buren’s award-winning work takes on these issues, on a variety of fronts, including the creation of two of the country’s first dedicated spaces for restorative justice, which bring offenders together with victims of crimes or violence in the hopes of finding a meaningful plan to repair the harm.She has also taken a preventive tack, by designing “pop up villages” that bring health, educational and cultural resources to communities hard-hit by incarceration.

“The intensity of her focus has allowed her to become a leader,” said Deborah Berke, the dean of the Yale School of Architecture, which has brought criminal and restorative justice issues into its core curriculum.

After receiving her architecture degree at Columbia University, Ms. Van Buren worked in London for Eric R. Kuhne, an architect whose firm helped to restore the pageantry of civic places. She credits him with teaching her that “you can be a passionate person and be an architect.”

She worked as a young architect in Australia and eventually moved to the Bay Area with her then-husband, where she dreamed up environments for the 2016 video game “The Witness.” “It was a lot more fun than obeying building codes,” she said.

As she put it at the Black In Design conference at the Harvard Graduate School of Design last fall: “There was something wrong to me about building better and prettier boxes to house black and brown people.” She is a board member of Architects/Designers/Planners for Social Responsibility, which since 2004 has encouraged architects to boycott designing prisons.

Her opposition to building new correctional facilities was bolstered in 2006, when she heard the activists Angela Davis and her sister Fania call for restorative justice from the packed pews of a black church in Oakland. It prompted her to ask “what is the role of the designer in bringing about healing?”

One recent answer is Restore Oakland, a former nightclub that Designing Justice/Designing Spaces refurbished as a hub for social justice nonprofit groups in the Bay Area, including a designated room for restorative practices.

The building opened last summer in the Fruitvale neighborhood, near where Oscar Grant III, a 22-year-old African-American man, was fatally shot by a white officer in 2009. Restore Oakland was founded as “a holistic vision of what community safety looks like,” said Zachary Norris, the executive director of the Ella Baker Center for Human Rights, which started the project with Restaurant Opportunities Center United, an organization that trains formerly incarcerated and low-wage workers for fine-dining positions.

The restorative justice space is a sun-filled aerie that can safely accommodate emotionally wrenching conversations. Cases will be referred by the district attorney and deal with crimes committed by adolescents, such as vehicle and laptop theft, robbery or assault. The design goes a step further than Syracuse by offering “cooling off” areas, separate entrances for sensitive cases and a blackboard for tussling out reparations.

At a community church in East Oakland, Ms. Van Buren worked with the nonprofit Building Opportunities for Self-Sufficiency on an ingenious collapsible plywood living unit, complete with a Murphy bed, bookcase and closet, for recently released inmates re-entering society. The units grew out of discussions with released inmates and offer a modicum of privacy and the ability to personalize space — qualities that can help further emotional health.

Alameda County recently ordered 15 units. “Deanna has taken a population that is sometimes overlooked by society and focuses on bringing their humanity back,” said Wendy Still, Alameda County’s chief probation officer. “These units transform into individual spaces, just like the individuals who are trying to transform their own lives,” she said.

Ms. Van Buren’s rather esoteric subspecialty in mobile architecture follows “Designs from the Inside Out,” a tool kit for working in correctional settings that was featured in the 2016 Cooper Hewitt exhibition “By the People: Designing a Better America.” At a workshop at San Quentin State Prison tied to the exhibition, inmates conceptualized a campus where they might live upon release, designing their own dwellings in concert with the community. “Instead of living in a kennel, if you will, we modeled it on a home setting,” said Vaughn Miles, who was recently released after 24 years. “It changed my perspective,” he said of the design lab. “It most definitely took me out of my comfort zone.”

Not all the projects function exactly as planned: Her firm designed a $250,000 mobile classroom for the nonprofit Five Keys Schools and Programs in San Francisco that provides free education in neighborhoods marked by poverty, violence and low high school graduation rates. The classroom is a retrofitted municipal bus outfitted with Wi-Fi, desks and a library. But the old bus was retired for a reason: it is prone to breakdowns, temperature swings and mold. If the windshield wipers or turn signal go on the fritz, the classroom winds up in the shop. “Like a model home, the first impression is what they’re going for,” John Beiser, a teacher, said.

Ms. Van Buren’s most ambitious undertaking so far is the reimagining of a hulking 471,000 square foot Detention Center in downtown Atlanta. Mayor Keisha Lance Bottoms signed legislation last year to close the facility, built for 1,300 and now down to around 100 people. Ms. Van Buren has been working with social justice organizations and a mayoral task force to transform the site into an “Equity Center” that will incorporate financial literacy, job training, access to legal services and other community needs. She will be presenting four plans to the Mayor, from a full reuse of the structure to a total demolition and rebuilding.

“It’s time for people who have been impacted by the system to change the system,” said Marilynn B. Winn, the executive director of Women on the Rise, a group of formerly incarcerated women who helped spearhead the campaign to close the jail.

Ms. Winn did some time in the Detention Center herself: “It was cold, damp and dreary, with a urine smell no matter how much disinfectant they used.”

Atlanta joins a growing number of cities repurposing correctional facilities — a phenomenon some call “prison flipping.” But these kinds of transformations are not easy ones: a plan by the NoVo Foundation to convert a former women’s prison in Manhattan into The Women’s Building, with Ms. Berke & Partners as architects, was recently canceled because of cost concerns.

Beyond architecture, Ms. Van Buren retains an activist spirit. In Oakland, she shares an apartment with two roommates — one Jewish and the other Palestinian.

Yet she can — on occasion — step away from the intensity of her work. She marched in costume in last year’s 1811 Slave Rebellion Re-enactment organized by the New York artist Dread Scott.

“In acting out the story, there was real healing there,” she said. Partial to immersive experiences, she is a regular at Burning Man and celebrated her 47th birthday at the “Wizarding World of Harry Potter” at Universal Studios (she bought a wand).

After all, she knows that rethinking the architecture of justice is a long game.

“I think of her as a phoenix,” said Ms. Winn of Atlanta. “The passion of the work is in her genes.”