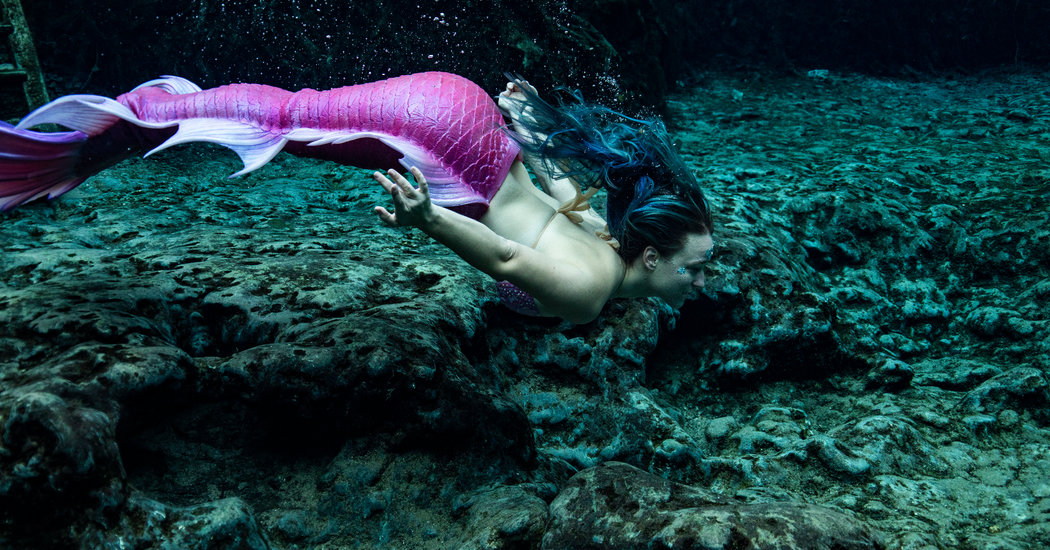 HIGH SPRINGS, Fla. — One by one, the mermaids dived into the water.

Their colorful tails — vibrant blues, yellows and oranges — shone brightly against overcast skies. It was a quiet day in late January and the mermaids, a group of young women who have bonded over a shared love for the mythological aquatic sirens, frolicked in the crystal clear waters of Devil’s Eye, one of the seven natural springs in Ginnie Springs Outdoors, a vast recreational park and campground facility.

Nearby, a group of divers prepared to sink into the spring, a bath hovering around 72 degrees, and explore the miles of underwater caves that can be found throughout this area about 25 miles northwest of Gainesville.

The scene’s tranquillity belied a contentious fight over the springs in the area that has roiled this small community for much of the past year.

The clash started when the family that owns the land around the Ginnie Springs recreational compound filed a water permit renewal with state water regulators. For years, the family has allowed various corporations to draw water from the springs and move it through a pipeline to a nearby plant, where it is bottled for sale.

In the latest renewal, however, the family said it planned to quadruple the amount of water historically pumped from Ginnie Springs to the full amount allowed under the permit, more than a million gallons a day. That water would be sold to Nestlé, which makes billions of dollars in North America every year through a variety of bottled-water brands.

And so began a debate that has reverberated across the state: Is there enough water to go around? And who gets to make money off this natural resource?

For Florida, decades of huge population growth and increased agricultural irrigation have reduced the levels of the Floridan Aquifer, an underground system of water-filled rocks that stretches 100,000 square miles and includes parts of southern Georgia and Alabama.

The aquifer provides fresh water to millions of people in fast-growing cities like Jacksonville and Orlando. In northern Florida, it supplies the springs, which feed nearby rivers, like the Santa Fe River, that are popular ecotourism spots and help drive local economies.

Dr. Knight estimates that as the demands on the aquifer have increased, average flows into the various springs have declined by more than a third. Some springs have dried up. Some coastal areas are seeing water that was once drinkable become contaminated with saltwater from the sea.

In High Springs, the battle over water has sharply divided the small, rural community.

On one side are environmentalists, who rail against the notion of a corporation using Florida’s natural resources for its own profit while adding to the problem of single-use plastic bottles. They are joined by local business owners who provide lodging, food and equipment rentals — canoes, inflatable tubes and diving gear — to the tourists who come from around the world each year to enjoy the natural springs.

They are facing off against the Wray family, which has owned the popular recreational spot for generations. The Wrays argue that even the increased amount of water that will be pumped represents less than three-quarters of one percent of the water flowing into the nearby river from the springs on their property. Some family members say the real problem is overpumping by large agricultural operations.

The family is backed by Nestlé, which says it is providing an essential and healthy beverage for consumers and creating well-paying jobs.

Last week, the scientific staff for the water authority considering the renewal recommended that the water permit be denied, saying, among other things, that bottling the water had not been shown to be “consistent with the public interest.” It also questioned if the bottling plant could handle the increased amount of water. Nestlé said in a statement that it was disappointed by the “narrowly focused” recommendation.

The authority, which has received more than 18,000 comments on the permit renewal and has outright denied a permit renewal only once in its 47 years of existence, is scheduled to officially consider it on Tuesday.

‘They want the water for themselves.’

In the early 1970s, Bob Wray, a successful developer in St. Petersburg, and his wife, Barbara, began buying property along the idyllic banks of the Santa Fe River near High Springs.

The original plan was to build a residential development, but Mr. Wray changed his mind and eventually created Ginnie Springs Outdoors.

“After years of cleaning up the springs and the surrounding lands, they decided that the springs were too special and beautiful to have only a few enjoy,” Risa Wray Klemans, one of Bob and Barbara Wray’s daughters, said in an email.

By the mid-1990s, the Wrays had discovered another way to use the springs: selling the water to beverage companies.

The family created the Seven Springs Water Company and applied for a permit from one of the five water districts in the state, to draw up to 1.152 million gallons a day.

For the Wray family, selling water to bottlers became a lucrative business, but also one that created tensions. From 2003 to 2008, the family received payments of nearly $5 million for the water — monthly payments ranged from $60,000 to $104,000 — according to documents that were part of a 2007 lawsuit among the family members.

In documents for the current water permit renewal, the Wray family said it intended to increase the amount of water being pumped from its springs from an average of about 300,000 gallons a day to the full amount allowed. If Nestlé draws the more than one million gallons, it would be enough to fill about 8.7 million 16.9-ounce bottles of water each day. Nestlé said that figure did not take into account water used for cleaning or in the manufacturing process and for employees to drink.

“That’s a lot of fresh water that’s being pulled out of this system used for plastic bottles that are just going to end up in the landfill,” said Merrillee Malwitz-Jipson, one of the local activists opposed to the proposal. She and her husband operate a company that rents canoes and kayaks to tourists.

One only has to drive about an hour northwest to see what happens when the springs run dry.

In the late 1800s, White Springs was the state’s hot vacation destination as visitors sought the restorative qualities of its sulfuric springs. Today, the four-story bathhouse that was built around the springs surrounds a dank, dark puddle. The springs basically stopped flowing in the 1990s.

“Originally, a lot of the locals pointed the finger to a phosphate mining facility in the area that used a lot of water,” said Helen Miller, the mayor of White Springs. “I believe the bigger factor was the growth of Jacksonville and its use of water.”

Some members of the Wray family have voiced their own concern over the years.

In 2014, a lawyer for Ginnie Springs Outdoors, which is operated by Mark Wray, Bob and Barbara’s son, said in a letter to regulators that there was concern that the quantity and quality of water flowing through the Ginnie Springs system were “in catastrophic decline.”

In public comments, Mr. Wray has argued that water authorities were too quick to hand out permits to farmers. He blames some of them, and their farms’ fertilizer runoff, for rising nitrate levels in springs and rivers.

“They didn’t want us to have the water to grow crops for food,” said Joshua Moore, who obtained a water permit in 2012 to irrigate about 72 acres near Ginnie Springs where he grows watermelon and other crops. Some members of the Wray family challenged that permit. “They want the water for themselves,” he said.

Mr. Wray did not respond to calls or an email seeking comment.

According to water regulators, nearly 70 percent of the permitted water use in the district is for agriculture or livestock use. Permits for bottled water make up less than 1 percent.

“What’s really happening to the springs and to this river is agriculture. It’s not the little old lady out there with her flowerpot. It’s 100 percent agriculture,” Mr. Wray said at a conservation summit in High Springs in 2013. “I guess we have to ask ourselves in the district are we going to keep permitting when we know the state of the springs and the river?”

Driving on the road to Ginnie Springs, Kent Koptiuch, a hydrogeologist for Nestlé, noted that several area landowners had contacted the company over the years, offering to sell their water.

For Nestlé, water is a big business. Sales of its water brands like Poland Springs, Arrowhead, Zephyrhills and other brands in North America totaled $4.5 billion last year.

Nestlé approaches water differently from its corporate peers. Coca-Cola and PepsiCo are mostly bottling tap water from municipal sources. Nestlé has stuck largely to natural spring water, arguing that consumers appreciate the taste that comes from the mineral content of each unique spring area.

But that strategy brings scrutiny.

In California, Nestlé has been criticized for extracting millions of gallons of water for its Arrowhead brand from a national forest already hit hard by drought. Nestlé said it monitored the area and collected less water if less water was being produced naturally.

In Michigan, Nestlé outraged residents by paying the state an annual fee of $200 to draw 576,000 gallons of water from White Pine Springs each day. Late last year, Nestlé’s plans to expand its bottling operations hit a hurdle when the state’s second-highest court ruled that the operation did not provide an “essential public service,” a designation needed to pass local zoning laws.

The company said that the fee was only a fraction of the total cost and that it paid tens of millions of dollars a year in state and local taxes and compensation for the 280 workers it employs in the area.

In Florida, Nestlé or private owners hold permits that allow the company to draw about three million gallons of water a day from four spring locations.

But in the case of at least one spring, Madison Blue Springs, in Lee, Fla., Nestlé has pumped only about half of the amount allowed.

So why are the Wray family and Nestlé proposing to quadruple the amount of water drawn from a fifth location, Ginnie Springs?

Nestlé said the amount of water it withdraws varies by the season and by consumer demand and that it doesn’t want to rely too much on one spring.

Jim Gross, a geologist and former scientist with the St. Johns River Water Management District who is now the executive director of Florida Defenders of the Environment, sees the permit requests as a sort of insurance policy for Nestlé.

If a severe drought were to occur and pumping levels were cut, the company could scramble to meet market demand.

“They know well that groundwater availability in Florida can turn on a dime,” Mr. Gross said. “It wasn’t that long ago, before Rick Scott became governor, when all of the water management districts were saying, ‘We’re pumping way too much water. We have to pump less.’”

Nestlé has tried to win over regulators and the public by arguing that bottled water is essential during hurricanes and other natural disasters; that it has been a good steward of the state’s natural resources for many years; and that it pays tens of millions of dollars in wages and millions of dollars in state and local taxes.

Some residents seem less than convinced.

“Don’t take our caves,” one of the divers growled as the two turned to enter the springs.